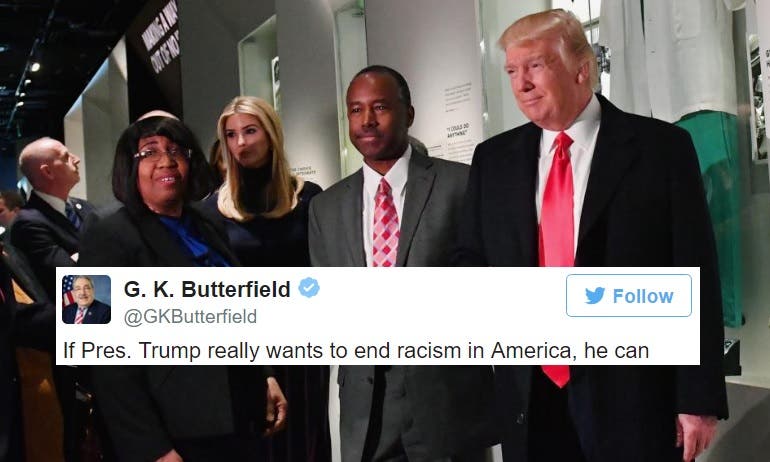 This morning President Donald Trump visited the Smithsonian National Museum of African-American History and Culture as part of his efforts to recognize Black History Month. However, after giving a few obviously prepared remarks that were suitably respectful Trump went off script and started bragging about himself.

Trump could not make it through a short speech and question-answer session without talking about the only success he has had – his presidential win (in which he failed to win the popular vote by almost 3 million votes). So far his presidency has been an undeniable disaster defined by chaos and ineptitude.

We all know Trump cares more about his ego than any topic of substance like the history of Black America, so of course he retreated to talking about election numbers. Maybe in his own twisted way he honored Black History Month by beginning his rambling boast with an acknowledgement of a black senator?

Trump explained that the Museum is “about love.” Is it really about love, or is it about a long hard fight against the brutalities of slavery, Jim Crow, and racism? And somehow, since this museum is “about love,” Trump believes his unconstitutional Muslim ban is justified.

Twitter has roundly criticized Trump for his insensitivity and inability to grasp what the African American History Museum actually stands for:

at the national museum of african-american history, donald trump will find an exhibit on john lewis, who he smeared as all talk, no action pic.twitter.com/TDzV1ZTwej

Or, in his mind, definitive proof he’s the “least racist person ever.”

Trump says the National Museum of African American History “is about love.” Is it?

If Pres. Trump really wants to end racism in America, he can start by removing Steve Bannon from the White House. https://t.co/NChY9WsYMj

Trump made sure to have Ben Carson RIGHT behind him in the shot in his visit to the African American Museum and now he's fake praising him.

Only Trump could make a visit to the African American History Museum all about him. ("I love those states where I won by double digits.")