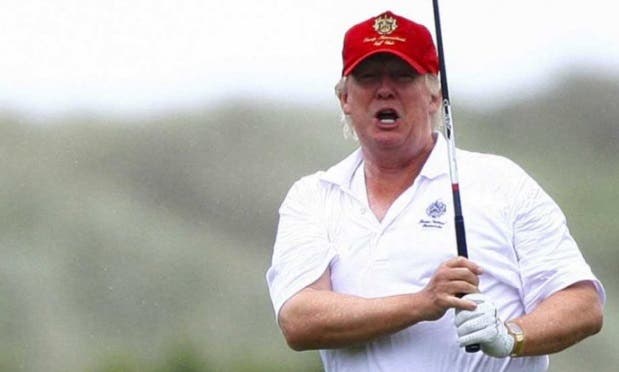 President Donald Trump, since taking office one month ago, has been golfing six separate times near his Mar-a-Lago Resort in Florida, CNN has confirmed.

Trump’s aides, however, are working overtime to cover up his frequent golf outings. CNN was only able to confirm the frequency of Trump’s outings by reviewing social media posts and interviewing professional golfers who joined Trump on the course.

It makes sense they Trump would try and hide his regular trips to the links since during Barack Obama’s presidency, Trump was a vocal critic of Obama’s occasional breaks from the rigors of duty. Trump, on the other hand, has flown to Florida three weeks in a row.

Here’s a sample of the ridiculous lengths to which Trump aides are trying to hide his golf habit:

[Rory] McIlroy later told No Laying Up, a golf blog, that he played a full 18 holes with the President, the CEO of Clear Sports and Paul O’Neill, the former New York Yankees right fielder.

The professional golfer said Trump “shot around 80” through 18 holes, eight strokes above the course’s par 72 layout.

The reported 18 holes of golf, however, directly contradicts how White House spokeswoman Sarah Huckabee Sanders described Trump’s visit to the golf course during a briefing with reporters on Sunday.

“I know he played a couple of holes this morning but I am not going to disclose any of the others that were there,” Sanders said, adding that Trump also “played a couple” on Saturday, as well.

The president often took to Twitter to mock the former president while he was on he was on the course.

President Trump “has some meetings and may play a few holes of golf” today, White House aide says

More ironic is the fact that on the campaign trail, Trump suggested he would be too busy working for the American people to have time to golf.

“I’m going to be working for you, I’m not going to have time to go play golf,” Trump said at the time.

President Obama was forthcoming with his golf trips, informing the press each time, even though he rarely allowed cameras on the course with him. Trump’s campaign, on the other hand, has attempted to shield the media from each trip.

While one of the six trips did include the Prime Minister of Japan, Shinzo Abe, the other five trips have been nothing but leisure. Again, a blatantly hypocritical move for the man who called Obama “worse than Carter,” for blowing off some steam on the links.

While anti-Semitism and anti-Muslim bigotry on the rise around the nation, multiple FBI investigations in Russian hacking the 2016 election, and a growing scandal over Russian potentially blackmailing his administration, Trump has chosen to take to the golf course instead of focusing on following through on his plan to “make America great again.”