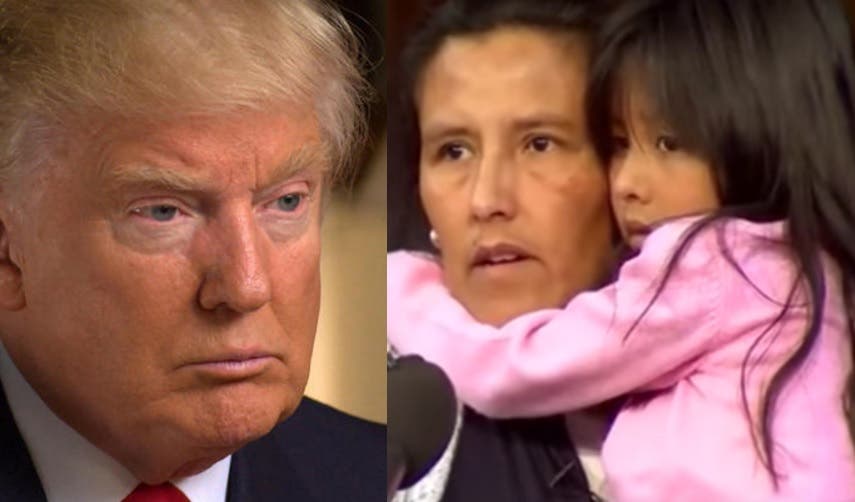 “Every year, we have paid taxes. And we’ve contributed our labor. And what many people don’t know is that immigrants can’t access the benefits of those taxes, any of the programs. That all stays here with this country. So I would like to ask: If you’re going to deport me, are you going to return 20 years of labor and taxes to me before I go, everything that I’ve contributed here?”

The other thing that I want to ask is—supposedly, I am a criminal because I drove without a license, because I had expired stickers on my car, because I had false documents to work and put food on the table for my children. But what should we call you, Mr. President Trump, when you have been evading taxes for years, when the way that you’ve been acting is not in keeping with good conscience?

The president, in contrast to someone like Ms. Viguerra, has scant taken risk in life. Ever since he was benefactor of a million-dollar loan from his father, Mr. Trump has shrouded himself in the so-called corporate veil — an aspect of U.S. law specifically designed to shield business owners from risk.

Throughout his career, Mr. Trump has filed for bankruptcy multiple times, leaving investors, employees and even entire communities scorched in his wake. The staggering losses that his failed business entities accumulated have since allowed Mr. Trump to live virtually tax free for years.

Of course, the Trump family business would be in far worse shape if it weren’t for immigrant workers, like Ms. Viguerra. In the summer of 1980, Trump Tower was under construction on 5th Avenue in New York. Workers, undocumented Polish immigrants, were working 12-hour shifts at the time, according to Time Magazine. They were treated so poorly, that many of the Poles were forced to sue.

When asked about the suit last year, Mr. Trump was struck by a convenient wave of amnesia.

“I hire a contractor. The contractor then hires the subcontractor,” he said. “They have people. I don’t know. I don’t remember, that was so many years ago, 35 years ago.”

The family business’ thirst for those cheap, reliable workers seems unquenched to this day. Eric Trump, who owns and manages Trump Wintery, is asking his daddy’s government to let him bring in 23 foreign workers under the federal H-2 visa program, according to the International Business Times. The Trumps’ other businesses have sought 286 foreign workers since Donald began his presidential bid.

But when it comes to balancing personal interests and the need to spin a hasty political rhetoric, Mr. Trump seems unabashed at ignoring and even flaunting his hypocrisy. As with so many of his bombastic endeavors, he seems to suffer little. Meanwhile, at the president’s hands, Ms. Viguerra, and workers like her and like the laborers who built the president’s 5th Avenue home, are facing greater risks than ever before. They deserve a chance at life in this country just as much as Trump deserves to impeached for his un-American and unconstitutional immigration edicts.