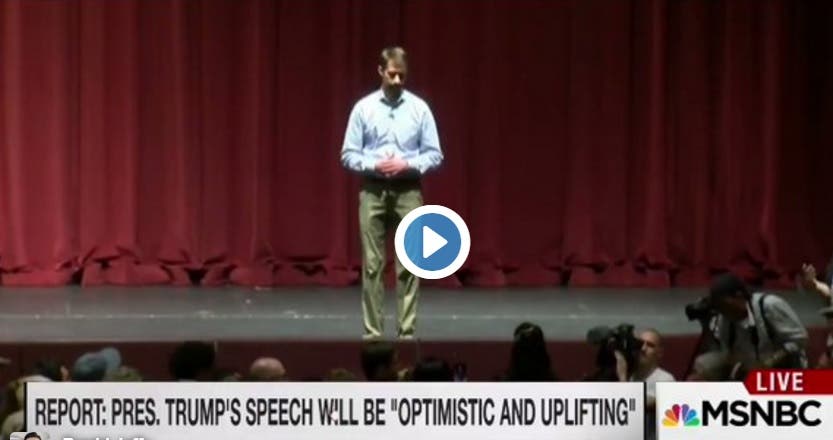 Tonight, Senator Tom Cotton (R-AK) held a town hall with the people he ostensibly represents. In a pathetic attempt to confuse and misdirect his constituents, he changed the venue at least three different times over the past few days and failed to inform the voters of Arkansas.

They found him anyway:

Furious citizens screamed at Cotton to do his job, to release Trump tax’s returns, to protect the climate and to stop funneling our tax dollars to overseas wars. Voters stood up and asked pointed questions that Cotton failed to properly answer, much to their consternation.

But it was one exchange over Cotton’s support for the repeal of the Affordable Care Act that truly struck with voters. This woman took the mic and called Cotton out to his face:

“I’ve got a husband DYING, and we can’t afford – let me tell you something. If you can get us better coverage than this, do it. Let me tell you what we have. We have $29 per month for my husband. CAN YOU BEAT THAT? Can you beat that with all the open heart surgeries…Here’s my question. I have sent you one message after the other about my family. I have INVITED you into my home. And …not a word except a regular letter sent.”

Tom Cotton could only stutter about restoring “choice” to the healthcare market in the wake of her fiery question. This is what Americans need to do; force Republicans to hear their stories, to face the consequences of their decisions – and vote them out if they won’t listen.

Ark. woman to Tom Cotton: "First of all, I am Mary Story from Fayetteville and I am not a paid protester." pic.twitter.com/0ULnW6gWwI

Emotional moment— Ark. woman confronts Tom Cotton: "I have sent you one message after the other…not a word except a regular letter sent." pic.twitter.com/ihSXAOtpJo