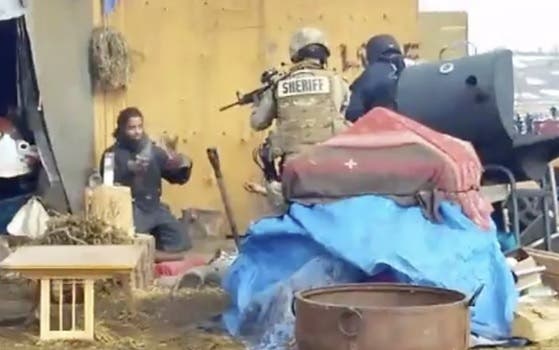 Federal authorities have begun their raid to evict the water protectors from the Oceti Sakowin camp, and the images coming out of the protest site are extremely disturbing.

History is repeating itself as heavily militarized United States law enforcement storm Native American treaty land to run them off- only this time they’re riding in Humvees and not on horses.

From Christopher Francisco's livestream: Law enforcement officer points a rifle at a Water Protector, while the Protector prays. #NoDAPL pic.twitter.com/U11EQi1QFw

Helicopters, humvees, assault rifles, being used by police against women and elders on U.S. soil. #NoDAPL

They're arresting the veterans #NoDAPL

Grandmother arrested. Please don't strip her & number her & put her in a dog kennel like you did the rest #NoDAPL pic.twitter.com/4bBiQNNSYY

The protesters, which once numbered in the thousands, have been fighting to halt the construction of a $3.8 billion oil pipeline which would desecrate lands sacred to the Standing Rock Sioux and threaten the health of local water supplies.

The majority of the protesters left last night, but at least 40, including veterans and tribal elders, remained to stand against tyranny to the very end.

The year-long protests have seen the police openly violating human rights with their intimidation tactics, setting attack dogs on protesters, sexually humiliating protesters with strip-searches and cavity exams, and arresting hundreds on trumped up charges.

The construction of the Dakota Access Pipeline was mothballed by President Obama until further environmental studies could be done to assess potential threats to the environment.

But one of President Trump’s first actions was to cancel the study and order pipeline construction to resume. Trump is believed to have a financial stake in the companies financing the pipeline, and his administration has deep ties to the fossil fuel industry. The top executive of the Dakota Access Pipeline donated $100,000 to the Trump campaign and associated PACs and is now reaping the rewards.

It’s unclear what the next step is for the Standing Rock Sioux and the #NoDAPL movement. But it is clear that President Donald Trump, the federal government, and the government of North Dakota have no respect for the treaties signed with the Native American tribes or the sanctity of their lands.

It’s shocking to see in this day and age that the use of violence and intimidation is still the automatic response of the government when it comes to responding to the legitimate demands of Native Americans, who are simply fighting desperately to stop the destruction of their heritage and preserve the cleanliness of local water sources. Our nation’s long history of genocide, abuse, and neglect towards the original inhabitants of this land is a dark stain on our history – and these images prove that we still feel no remorse for our past sins.

Watch a livestream of the raid here: