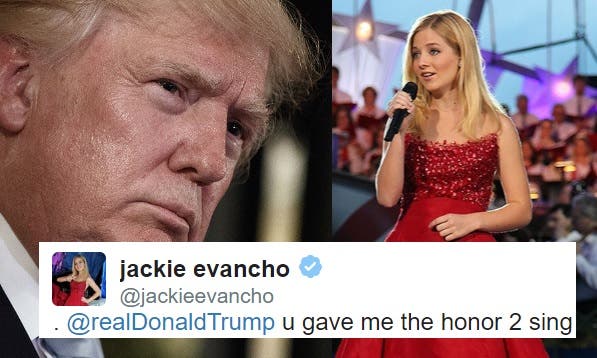 The young singer who performed the national anthem at Donald Trump’s inauguration, sixteen-year-old Jackie Evancho, is suddenly very displeased with the president.

Unable to pass up an opportunity of that magnitude for her young career, Evancho is now hoping to use that favor to make a difference in the lives of trans students across the nation.

Earlier today, Trump repealed a legal guidance issued by the Obama administration which extended the Title IX restrictions against discrimination based on sex. Religious extremists like Attorney General Jeff Sessions within the Trump administration are eager to force trans Americans to adhere to a binary gender identity and have decided to turn trans children, who are already grappling with enough confusion and social stigma as it is, into a political punching bag.

Evancho’s sister Juliet is transgender, and Trump’s decision to repeal the guidance has deeply upset the both of them. Evancho took to Twitter tonight to beg the President to give her the honor of meeting with her sister so they might explain just why this is such a hurtful decision.

I am obviously disappointed in the @POTUS decision to send the #transgender bathroom issue to the states to decide. #sisterlove

. @realDonaldTrump u gave me the honor 2 sing at your inauguration. Pls give me & my sis the honor 2 meet with u 2 talk #transgender rghts ❤

Trump, who has little use for religion or its constricting social conventions, most likely has no personal opinion on this matter or even a full understanding of what the consequences of his decision are.

A meeting with Evancho and her sister might be enough to sway Trump; if he could be brought to understand that it would be a source of good publicity for once, he’d probably agree to it in an instant.

After all, Evancho helped bring in the biggest, most tremendous inauguration crowd in American history, right?

Unfortunately, it’s unlikely that Trump’s white supremacist handlers will allow any kind of meeting to happen.