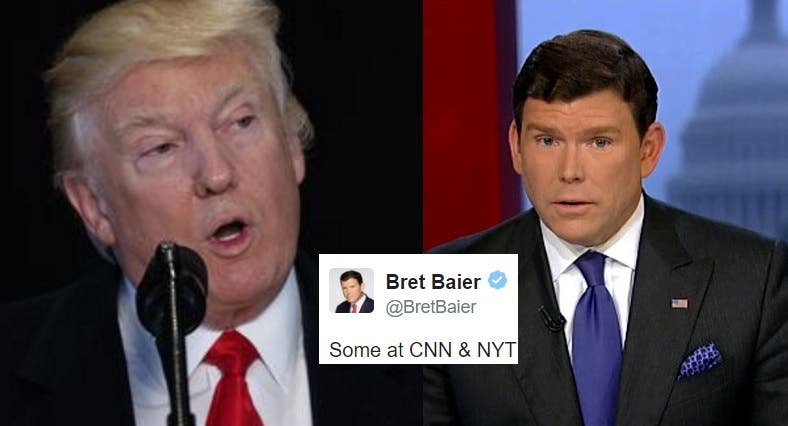 A Draft Of Paul Ryan’s Obamacare Replacement Just Leaked, And It’s A NIGHTMARE

President Trump’s decision to exclude major mainstream newspapers and media outlets from today’s White House press briefing is unprecedented in American history and represents an appalling attack on the spirit of the First Amendment and the Constitution that oathbreaker Trump swore to uphold.

Even FOX News “reporter” Brett Baier began complaining about the President’s unfair treatment of the press.

Some at CNN & NYT stood w/FOX News when the Obama admin attacked us & tried 2 exclude us-a WH gaggle should be open to all credentialed orgs https://t.co/8Vjcs0KCPR

It appears that Baier is referring to a 2009 incident when FOX accused the White House of banning the propaganda network from a robin round-table interview with Obama administration “pay czar” Kenneth Fainberg.

It will come as no surprise that the “exclusion” incident to which Baier is alluding to never happened.

James Rosen of Fox News reported that “The Washington bureau chiefs of the five TV news networks [ABC, CBS, CNN, FNC and NBC] consulted and decided that none of them would interview Feinberg unless Fox was included, and the administration relented.”

“There was no plot to exclude Fox News, and they had the same interview that their competitors did. Much ado about absolutely nothing” said the Treasury Department.

Mediaite reports that “the other networks insisted on Fox’s inclusion on the basis of their mutual pool arrangement, not as some show of solidarity. In fact, when Treasury brought the matter to the White House’s attention, it was the administration who approved Fox News’ inclusion.”

To summarize: Somebody at FOX screwed up bigly and they tried to pass it off as an attack on their network by the Obama administration.

On the other hand, President Trump’s decision to exclude the major newspapers and news networks from his White House press briefings is an open and obvious attack on the free press and the journalistic tradition that has helped keep our government honest for the past three hundred years.

While it is somewhat gratifying to see FOX News giving cursory concern about journalistic ethics and free speech, it is deplorable that they used their response to sneak in a cheap shot at President Obama and equate his imaginary slights to FOX with the petty tyrannies of a would-be dictator.