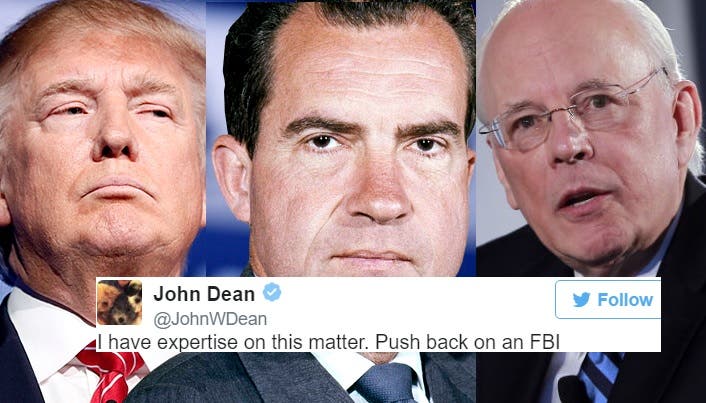 Every News Outlet That Trump Banned Has ONE Thing In Common

There is no doubt in the mind of John Dean, White House counsel for former President Richard Nixon, that when it comes to the Donald Trump’s Russia scandal, the White House is orchestrating a massive cover-up. He should know – he served eight years in prison for his role in Watergate.

I have expertise on this matter. Push back on an FBI investigation of the White House is better known as a COVER UP: https://t.co/SODcPzEMna

Dean isn’t lying, he is quite the expert. Not only did he work in the White House during one the nation’s most notorious scandal, he is also the author of numerous books on the topic, including The Nixon Defense: What He Knew and When He Knew It.

“Well, what I see and hear, in following it, are echoes of Watergate. If you recall, Watergate ran about 900 days. In other words, it went on for years, starting with a bungled burglary at the Democratic National Committee and right up to Richard Nixon’s resignation, followed by the conviction of his top aides. So it ran a long time. What we’re seeing is very accelerated,” Dean told journalist Amy Goodman of Democracy Now!

Dean went on to explain that the scandal is accelerated because of modern media’s “vigilance” with staying on this case. While Trump is busy attacking the media, they are busy uncovering what could be the biggest political scandal of the 21st Century.

He added: “And what I see or hear are echoes of Watergate. We don’t have Watergate 2.0 yet, but we have something that is beginning to look like it could go there.”

Like Nixon’s presidency, Dean has predicted Trump’s reign will end in pure calamity.

The way the Trump presidency is beginning it is safe to say it will end in calamity. It is almost a certainty. Even Republicans know this!

In an interview with Vox, Dean criticized the administration for running a “slippery and haphazard [White House], a makeshift operation without a coherent vision or plan.”

Dean concluded that Trump reminded him of Nixon, saying, “It’s obvious that his presidency is vulnerable, and yet he keeps creating those vulnerabilities every day. Like Nixon, he’s a slave to his own worst instincts.”

Dean only confirms the fear many Americans have; that Trump’s ties to Russia are deep and that the scandal he is brushing off as “fake news” is as real as the sun is bright. The FBI has launched three investigations into Russia’s involvement in the 2016 election hacking, Trump’s former National Security Adviser Michael Flynn was having secret conversations with high-ranking Russian officials, and parts of the incredibly damaging Russian intelligence dossier have been confirmed by US intelligence agents.

The White House is covering up something, and if Dean is right, it could be big enough to take the whole administration down.


Add your name to call on prosecutors to ARREST DONALD TRUMP for his crimes!Advertisements
Tags
style