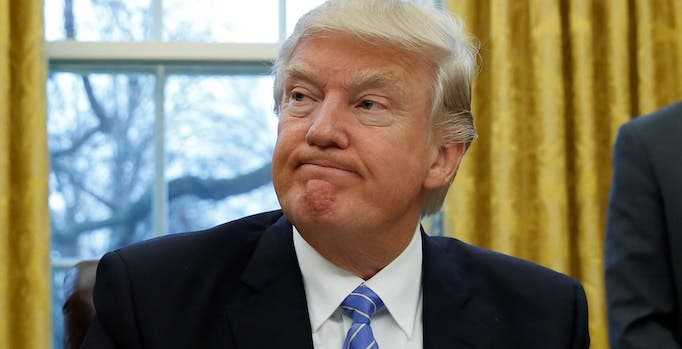 President Donald Trump just got more bad news regarding his unconstitutional Muslim travel ban after a report, leaked to the Associated Press on Friday, revealed that the Department of Homeland Security found no evidence that citizens of seven Muslim-majority countries included in the travel ban pose any threat to the United States.

Trump ordered the report after the ban was blocked by the 9th US Circuit Court of Appeals.

The findings of his own internal report refute the hollow national security excuses he’s tried to pass off as justifications for discriminating against Muslims:

The three-page report challenges Trump’s core claims. It said that of 82 people the government determined were inspired by a foreign terrorist group to carry out or try to carry out an attack in the United States, just over half were U.S. citizens born in the United States. The others were from 26 countries, led by Pakistan, Somalia, Bangladesh, Cuba, Ethiopia, Iraq and Uzbekistan. Of these, only Somalia and Iraq were among the seven nations included in the ban.

The report also found that terrorist organizations in Iran, Libya, Somalia and Sudan are regionally focused, while groups in Iraq, Syria and Yemen do pose a threat to the U.S.

Critics argued from day one that no terrorist attack carried out on US soil has ever originated from one of the seven countries Trump included in his travel ban order, yet countries such as Saudi Arabia, which was home to 15 of the 19 hijackers of the September 11 attacks on the US, were not listed.

Not surprisingly, Trump has a handful of business dealings in Saudi Arabia that would keep them off the list for his own personal gain, proving that the ban is not about keeping America safe and is only being used to discriminate against Muslims.

Even with this evidence, President Trump has vowed to issue a revised executive order that will focus on the same seven counties listed in the DHS report.

“We are going to keep radical Islamic terrorists the hell out of our country,” Trump said during his speech at the Conservative Political Action Committee on Friday.

What Trump didn’t mention was by allowing Muslims to enter from those countries, he would accomplish the same thing. What the president meant to say was that he would keep Muslims out of the country.