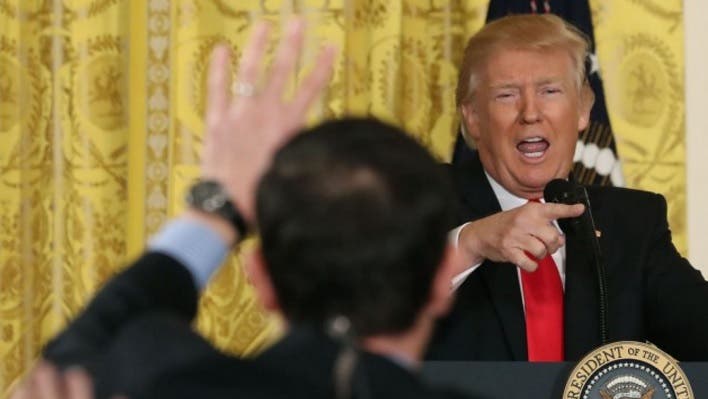 Donald Trump just censored a wide swath of major mainstream news outlet – and they have one obvious thing in common: they are all investigating or actively reporting on the President and his administration’s ties to Russia.

This afternoon, just a few hours after Trump went on an unhinged rant against the media during his speech at CPAC, White House Press Secretary Sean Spicer crossed the line from democracy to dictatorship by banning a group of objective media outlets from one of his press briefings and allowed only right-wing propaganda outfits like Breitbart, OAN and the conservative Washington Times to attend.

According to the Washington Post, whose reporting recently toppled Islamophobe General Michel Flynn and today exposed that Trump’s team is actively begging the FBI to cover up the Russia affair, noted that the White House banned these eight specific media organizations for their unfriendly Trump-Russia coverage:

CNN reported that Trump and President Obama had been briefed on the now infamous “Golden Showers” dossier.

The New York Times reported on Inauguration Eve that warrants were being used to eavesdrop on then-President-elect Trump’s inner circle, information that later was used to force out National Security Advisor Michael Flynn.

The Hill reports that Trump also excluded the BBC who is diligently following up on Trump’s Russian dossier, and the Daily Mail who reported that a high-ranking ex-KGB officer cited in the British dossier was found dead, and the Kremlin tried to cover it up.

Additionally, The Hill was evicted from the inner sanctum of Trumpdom for its all around quality reporting on practically everything that happens in Washington, D.C. today, including numerous scoops on Congress’ reaction to the Trump Russia affair.

LA Times reporters released a transcript of Trump’s fishy explanations for why his campaign was frequently in contact with Russian nationals and public officials. As California’s largest news outlet, they had to be penalized, even though they’ve got a conservative editorial page.

The Trump regime is having another terrible week, as the President’s public ravings against the media are only provoking an increasing flow of journalistic resources directed at aggressively overseeing the Executive Branch.

Russia’s obvious grip on the Trump Administration isn’t going to leave the radar of any of these news organizations until the 45th President is safely escorted from the premises of the White House for the last time.

In their own words, the Trump regime has just crossed the line from democracy into a dictatorship after only 34 days in office.