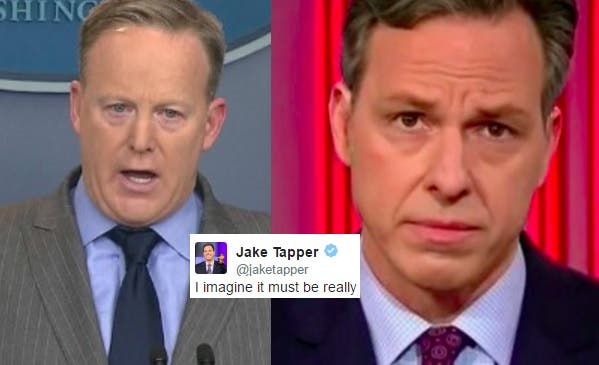 Earlier today, Press Secretary Sean Spicer took to Twitter to complain about how the New York Times apparently failed to get his birthplace right in an article about Donald Trump’s previous dalliances with tabloid magazines.

For the record, our current President informed his second wife that he wanted a divorce by telling a tabloid they were splitting up and then mailed her a copy of the headline.

Spicer, perhaps taking a leaf from his boss’s book, tweeted out today that the Times never asked him where he was born, which may or may not be true. More likely, given that the White House almost never responds to requests for comment, the Times asked and Spicer just never answered.

For the record @nytimes @grynbaum can't even get where I was born right and failed to ask https://t.co/hIb3QFxK6P

CNN’s Jake Tapper immediately saw the inherent hypocrisy in Spicer’s complaint and fired back with this savage response:

I imagine it must be really annoying when someone puts out false info about where you were born. Must really bother you!!

President Donald Trump was once the biggest proponent of the outrageously insulting and obviously racist conspiracy that President Obama was a secret Muslim from Kenya who wasn’t born in the United States.

Trump was so convinced that he made a video promising to donate $5 million to charity if Obama proved him wrong:

“Now, I have a deal for the President. … If Barack Obama opens up and gives his college records and applications, and if he gives his passport applications and records, I will give to a charity of his choice — inner city children in Chicago, American Cancer Society, AIDS research, anything he wants, a check, immediately, for $5 million.”

In a shocking turn of events, the President did produce his birth certificate and cheapskate Trump never paid up.

Sean Spicer has absolutely no grounds to complain about the NY Times’ possibly getting his birth location wrong. After all, he banned them from a White House press conference only yesterday.

Here’s a video of Donald Trump promising to donate to charity if President Obama proves he was born in America: