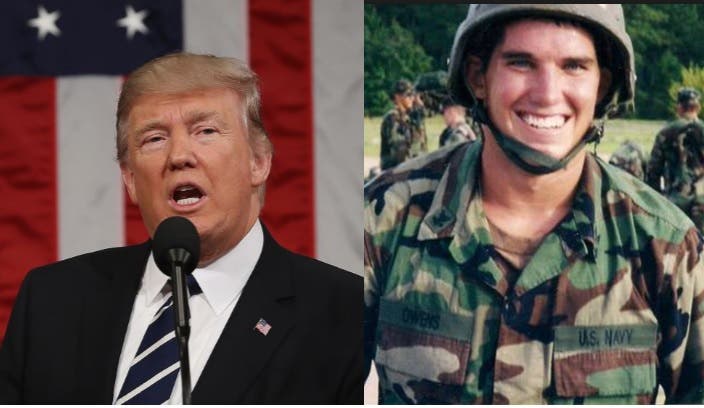 President Trump tonight received fawning reviews from the media that he had decried as “fake news” for his kind treatment of Chief Petty Officer William “Ryan” Owens’ widow at tonight’s joint address to Congress.

All of a sudden, Trump was “presidential” for doing what any decent human would have done. But he couldn’t hold himself together the entire time – like a hungry addict, he was intoxicated by the applause that Congress gave to honor Carryn Owens and her husband’s memory, and threw in a little ratings ad-lib:

And Ryan is looking down right now, you know that, and he’s very happy because I think he just broke a record.

Ryan shouldn’t be looking down at all, Trump, because you casually gave the order to go ahead with that mission at dinner without “without sufficient intelligence, ground support or adequate backup preparations,” as military officials said you did.

For Trump to exploit Owens’ grieving widow for a photo-op and then joke about applause duration is one of the more despicable things he’s ever done – and it’s a long list.

If he wanted to honor Owens’ memory, Trump would open an investigation into the mission as Owens’ father demands that he do.

If Trump really wanted to honor Owens’ memory, he wouldn’t have lied to the American people and admitted that the raid had been a failure.

“Ryan was a part of a highly successful raid that generated large amounts of vital intelligence that will lead to many more victories in the future against our enemies” said Trump during tonight’s speech.

The primary objective of capturing al-Qaeda in the Arabian Peninsula (AQAP) leader Qassim al-Rimi failed. It’s not even clear he was ever present, but al-Rimi did later release an audio message mocking the “White House’s new fool.”

Officials have admitted that the secondary objective – intelligence gathering – was also a failure. Owens and nearly thirty civilians, including ten children, lost their lives for nothing.

If Trump wanted to honor Owens’ memory, he wouldn’t have used his death as a cheap shield to stave off any criticism about his decision. “I think anybody who undermines the success of that raid, owes an apology and disservice to the life of Chief Owens“ complained Press Secretary Sean Spicer about Sen. John McCain’s legitimate questions about the raid.

If Trump wanted to honor Owens’ memory, he wouldn’t have used his death to invent a fake story about a reporter who published a story Trump didn’t like and then leaked it to a right-wing propaganda outlet.

Owens knew he might not come back from this raid, and went because it was his duty to his country. He made the ultimate sacrifice because that’s what he swore he would do should it come to it.

Now it’s time for Trump to do his duty to his country and uphold to oath that he swore. He needs to behave like a President. He needs to respect the Constitution. He needs to listen to his intelligence briefings and learn as much as he can because the hundreds of thousands of American soldiers are out there, trusting that their leader will make the best-informed decisions he can to keep our nation safe and to keep them alive.

And for the love of all that is holy, he needs to not do things like use a grieving widow for feel-good publicity and then use Congress’ veneration of a fallen soldier to make a quip about his goddamned applause ratings.