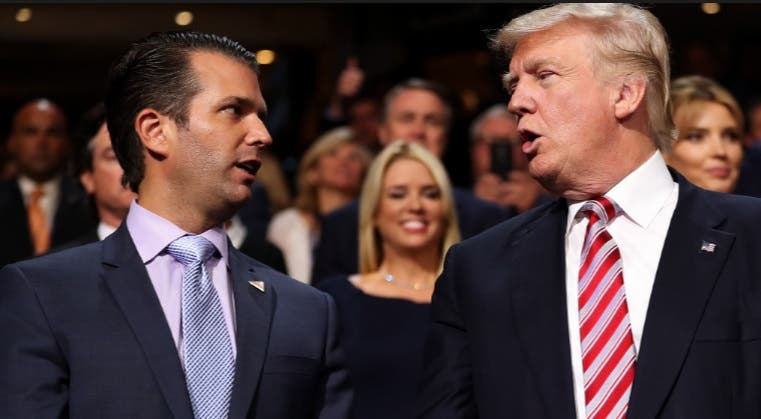 The President’s son just got caught accepting $50,000 in payment to speak in front of a pro-Putin Syrian expat group in Paris during last year’s elections.

The latest revelation is a major Russian contact between the Trump campaign and one of its key surrogates. The Wall Street Journal reports:

Donald Trump Jr. addressed a dinner on Oct. 11 at the Ritz Hotel in Paris, hosted by the Center of Political and Foreign Affairs. Its president, Fabien Baussart, and his Syrian-born wife, Randa Kassis, have cooperated with Russia in its drive to end the Syrian civil war, according to U.S., European and Arab officials. The younger Trump was likely paid at least $50,000 for his Paris appearance by the Center of Political and Foreign Affairs. The Trump Organization didn’t dispute that amount when asked about it by The Wall Street Journal.

“Donald Trump Jr. has been participating in business-related speaking engagements for over a decade—discussing a range of topics including sharing his entrepreneurial experiences and offering career specific advice,” said Amanda Miller, the Trump Organization’s vice president for marketing.

Fabien Baussart formally nominated Vladimir Putin for a Nobel Prize last year. ABC News reports that “A key organizer of the event later told reporters she flew to Moscow to brief a senior Russian official about the session.” ABC also noted that the news has reported on the conference organizers and the report substantiates concerns that Donald Trump Jr. would’ve had access to interact with the Russian oligarchy:

Reports in French newspapers and intelligence journals indicate that Baussart and Kassis have frequently touted their Russian ties. A news report in France described Baussart as “a former lobbyist for Russian oligarchs in France.” A news service called Intelligence Online reported that Baussart organized “efforts to lobby the French authorities and, in particular, the French intelligence services.”

Mrs. Kassis told The Journal that she’s “optimistic about U.S.-Russia cooperation” after her wonderful meeting and speech with the President’s son.

This revelation makes Trump Jr. the third member of the Trump Campaign inner-circle – along with Paul Manafort and disgraced former NSA Director Gen. Michael Flynn – who is known to have accepted foreign payments from a Russian-linked source.

Click here to read about the 2008 speaking event where Trump Jr. announced his family’s major business move into Russia: