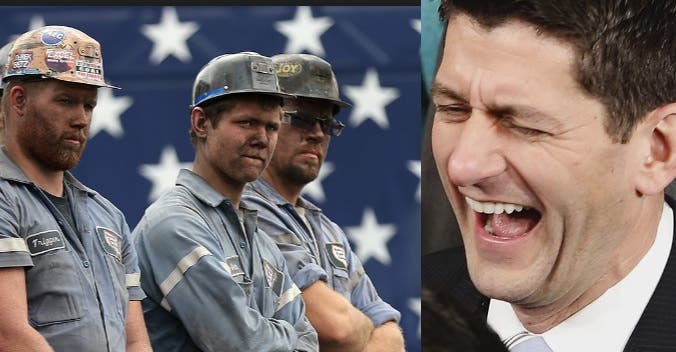 Another day has passed and another campaign promise from President Donald Trump has been broken. During the heated presidential contest again Secretary Hillary Clinton, Trump vowed to take care of people in the coal mining industry.

But there’s been silence from the White House as over 22,000 retired coal miners and the surviving family members of dead miners received a horrifying surprise in their mailboxes on March 1st.

They were just notified that both their retirement benefits and medical benefits would no longer be honored after 60 days. The president of the United Mine Workers of America, Cecil Roberts, penned a scathing press release indicting Trump and the Republican Congress for their failure to address this issue. He wrote:

This is the third such letter that has gone out to retired miners and widows in the last five months. The first two went out in October and November of last year, and instead of Congress passing a permanent solution to this issue, it passed only a four-month extension of benefits. Those benefits will run out on April 30, which triggered this new letter.

Congress cannot keep kicking this can down the road. This is causing tremendous mental and in some cases physical trauma to these senior citizens. They will now have to begin contemplating whether to continue to get medicines and treatments they need to live or to buy groceries. They will now have to wonder if they can go see a doctor for chronic conditions like black lung or cancer or pay the mortgage.

The Republicans control both houses of Congress and the White House. They have everything they need to repay the workers that they promised to help in exchange for their votes.

Instead, Trump has issued an executive order to allow for coal production to increase on previously protected Federal lands – likely to lead to huge profits for fossil fuel companies and a bad case of black lung for everyone else involved.

The coal miners are in this situation because of an agreement originally struck in 1946 that guaranteed benefits for retirees and their families, for the entirety of their lives if an individual worked in the mines for 20 years or more between the United Mine Workers of America and the United States government.

However, those benefits are only payable through companies which are still in business, and many coal mining operators have declared bankruptcy since 1946.

Through bankruptcy proceedings, various courts have decreed that those now defunct businesses owe their former workers nothing.

Congress has attempted to temporarily fund the pensions of the workers who have been left out in the cold, but it is ultimately not the burden of Congress to provide lifetime benefits to these workers.

Now those benefits are about to run dry, and the Republicans in Congress who want to add another $54 billion in military spending can’t find the spare change to help coal workers.

Trump has shown he has no loyalty to the workers in the past, or the families who have suffered the consequences of their loved ones giving their lives to the coal industry. It is dark, gritty work that has an impact on the long-term health of individuals down in the mines.

The true solution is to not have given the various coal mining operations such sweetheart deals in bankruptcy court, and to have forced them to set aside the funds necessary to fulfill their obligations to their workers.

Instead, the bankruptcy courts allowed debts to be wiped away, and workers left out in the cold. This was, by every standard, a preventable tragedy which did not have to transpire.

If the Republicans continue to do nothing, there will be over 22,000 workers and their families who will be cut off from the benefits, and they will then be forced to attempted to survive in another manner. Naturally, and without missing a beat, if these individuals then apply for government subsidies like food stamps the Republicans will surely call them lazy moochers on the system, even though it will have been the Republican Party who put them in the precarious position.