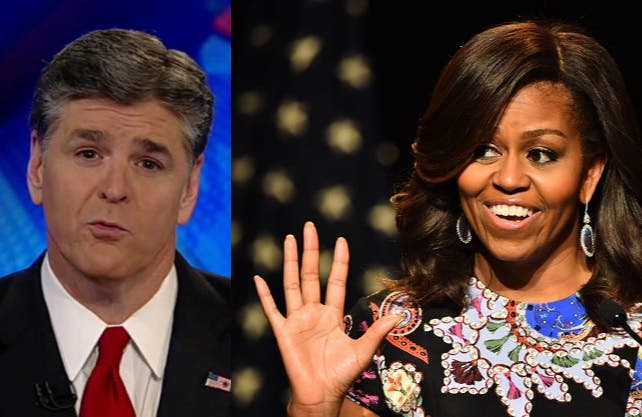 Conservative revisionism in the Trump era is simply an astounding thing to behold. Now that President Fake News himself is willing to look the nation in the face and tell them that their own eyes are lying to them, all bets are off when it comes to telling the truth.

Nobody has more eagerly embraced the post-truth reality than Sean Hannity, that insufferably smug overgrown frat boy who has made a career out of simultaneously demeaning women with all the arrogance of a date rapist who admonishes his victim for drinking too much and voraciously suckling the teats of whichever appalling extremist is in the right-wing’s good graces at that particular time.

Tonight, however, Hannity’s hypocrisy crossed a line. In an act of journalistic heresy so heinous that it’s hard to understand how he didn’t combust on the spot, Hannity began complaining that liberals were too cruel to White House adviser Kellyanne Conway and that the right-wing never spoke ill of former First Lady Michelle Obama.

The topic of discussion was an admittedly atrocious remark by Rep. Cedric Richmond (D-LA), who attempted to make an awful joke linking Conway’s infamously peculiar posture while on the Oval Office couch and the Monica Lewinsky sexual misconduct scandal.

Hannity’s take on the subject is problematic, to say the least:

I think that’s the lowest of low; we’re going to pick on a woman — well, multiple women, because they pick on Kellyanne. Have a congressman, what’s his name, Cedric Richmond, quote, “joking,” “Conway looked very familiar in that position on the couch in the White House on her knees.“ Wow. How disgusting and despicable a human being is he? Can you imagine if anyone — which, God forbid, would ever say that about Hillary?

Or Michelle Obama? How well would the reaction be? They’re attacking a three year old kid because he’s fidgety at three in the morning. I’m fidgety and I’m 55 years old. Leave the kid alone. Nobody picked on Malia and Sasha, no conservative that I know of. Nobody picked on Michelle Obama except for the stupid statements, “for the first time in my adult life I’m proud of my country,” she inserted herself into the campaign. If she’s going to say something like that then she deserves to be criticized.

Are you kidding me?

You yourself have demeaned and attacked First Lady Michelle Obama on multiple occasions.

“Why does Michelle Obama sound so bitter and angry as she campaigns for the White House?”

“In the midst of an economic slowdown, Michelle Obama’s clothes. Hope that I can get all these great designer clothes and that everyone will report on it and call me, you know, Jackie Kennedy. And Camelot. It’s unbelievable.”

“But it’s been suggested that one of Obama’s voluntary relationships is more revealing of his radicalism, anti-Americanism, and anti-capitalism than all of the others: his choice of marital partner.”

“The Western world is under constant threat from Islamic jihadists but, your first lady Michelle Obama is busy making a rap music video about going to college.”

Any of those statements ring a bell?

Conservatives across the nation have made a hobby out of saying horrifyingly racist things about President Obama and his heroic wife.

Remember when your buddy Carl Paladino said ““Michelle Obama…I’d like her to return to being a male and let loose in the outback of Zimbabwe where she lives comfortably in a cave with Maxie, the gorilla?”

Remember when that Republican mayor in West Virgina called her an “ape in heels?”

Remember when Malia announced she was going to be attending Harvard and Republicans filled the comment section with racial slurs?

Remember the millions of times that conservatives mocked the Obama family for their skin color and for their appearances?

Hannity, do you remember anything at all about what you and the rapist scumbags you work with and your braindead viewers have said and done over the past eight years?

That’s not even bringing up the fact that your president, the man who you love to invite on your show to feed softball questions, made that same remark, explicitly, on television. “Must be a pretty picture, you dropping to your knees [leers]” said Trump on the Celebrity Apprentice.

Your beloved President Trump also has been accused of rape by his wife and a woman who was then thirteen years old along with twelve other accusations of molestation, attempted rape, or other forms of sexual harassment.

How disgusting and despicable a person is he.

After the absurdity of the past few weeks, CNN’s Paul Begala tonight said “the hypocrisy is just too spectacular. Irony has not only died – irony first drank a gallon of antifreeze, climbed to the top of the Washington monument and threw herself off. There is no more irony in America.”

I think that sums it up quite nicely.