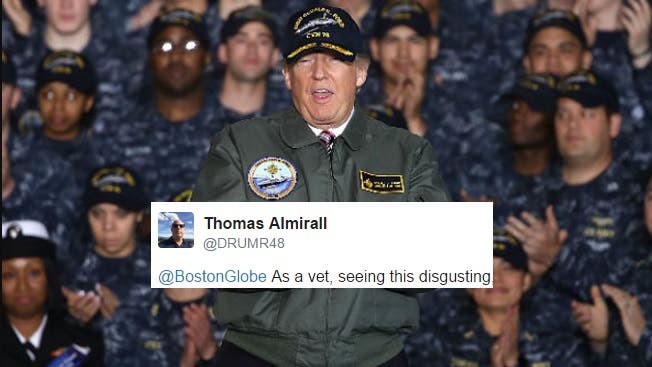 Yesterday, President Trump tried to ride the wave of goodwill he seemingly earned by his callous exploitation of a Navy SEAL widow’s grief at his Joint Sessions address by giving another speech, this time on the USS Gerald Ford supercarrier in front of a host of sailors.

Ever eager to embrace the prestige that comes with a uniform without ever having to work for it, Trump decided to play dress-up and donned a U.S. Navy jacket and hat before making a customarily incoherent speech (“You stand on that deck, and you feel like you’re standing on a very big piece of land.  But this is better than land”) that insulted our miltary men and women by implying that they don’t try to “win” anymore.

During his speech, he announced that he insisted on wearing the jacket and reaffirmed his unnatural love for hats.

“You know what; they just gave me this beautiful jacket. They said, ‘Here Mr President, please take this home. I said, ‘Let me wear it,’ and then they gave me the beautiful hat and I said, ‘You know, maybe I’ll do that’. We have a great ‘Make America great again’ hat but I said, ‘This is a special day, we’re wearing this, right?’”

His remarks were not well received by veterans, however, who say that “cosplaying” Trump doesn’t deserve to put on the jacket since he dodged the Vietnam draft with misleading medical deferments.

Trump also notoriously spent the time that he didn’t spend in Vietnam cavorting around with models. allegedly having so much unprotected sex he referred to it as his “own personal Vietnam.”

Veteran John MacFarland took to Facebook to complain about Trump:

“I realise Trump rates a salute as Commander in Chief and he can wear a command cap if he’s comfortable doing so, but that doesn’t mean we sailors and other vets have to approve of it.

This clown got five deferments when his generation was called. Instead of serving, he dodged, ducked and weaved.

If he had any self-awareness he wouldn’t stride around ship in that cap and jacket like he rates anything aside from what custom and courtesy dictate. All the while scowling like a tough guy.”

As a vet, seeing this disgusting, pathetic man in that getup aboard the new carrier makes me sick to my stomach. @DeptofDefense

As a vet, I am appalled to see draft-evading #trump donning a military cap & jacket on a naval aircraft carrier!Insult to navy seal who died

As a Navy vet, I truly disliked seeing Trump struting around the Gerald Ford carrier. 4 or 5 defferments! Sad

As a Navy vet, seeing that shirker Trump play at Commander-in-Chief on a carrier makes me ill.

These veterans are right to be angry. President Trump “loves” our veterans and our military servicepeople – but only as political props for photo-ops.

When it comes to actually doing anything to help or support them, so far all he’s managed to do is to get a Navy SEAL killed in a poorly planned raid, used that SEAL’s widow for a despicable publicity stunt, and close down childcare centers at military bases.

On top of that, Trump has insulted a Gold Star family and demeaned a Muslim war hero, slammed Sen. John McCain for getting shot down and spending five years in a POW camp, telling women in the military they were responsible for their own sexual assaults, saying that only weak veterans get PTSD, and screwing veterans’ charities out of at least $3 million.

That shows you how President Trump really feels about our fighting men and women. He is unfit to serve as President and unfit to wear that jacket.

h/t to the Independent