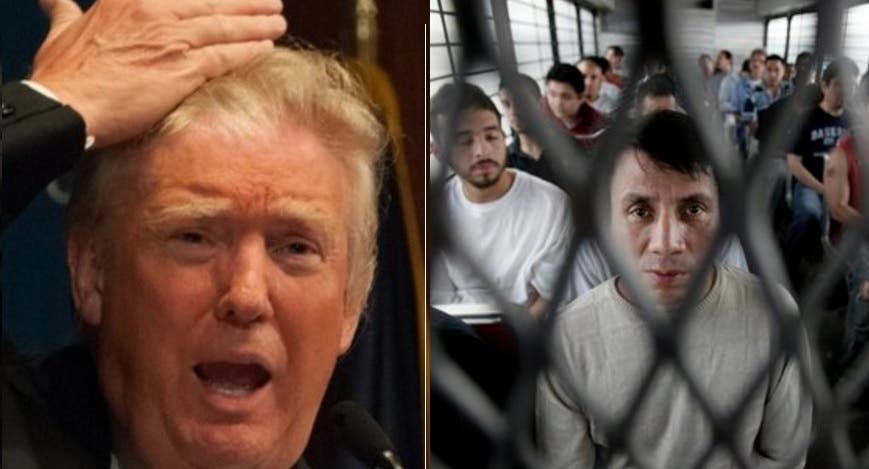 The Trump administration’s executive order targeting illegal immigrants is in serious trouble after a Florida judge issued a 15-page ruling on a Petition for Habeas Corpus (below), that declares it is unconstitutional for local jails to hold immigrants with ICE detainment orders after state authority ends.

A Florida man from Haiti, James Lacroix, was arrested for driving without a license and Miami-Dade County kept him detained after he was adjudicated and finished his sentence just two days ago.

Today, a state judge ruled against Miami-Dade County for holding the 45-year old Haitian national past the time served for his driving offense because they lacked any further probable cause for detention.

Judge Hirsch ruled that the Constitution’s delegation of immigration authority to be the sole province of federal authorities was known all the way back to the very first Congress -per a detailed precedent written by deceased Justice Antonin Scalia – and that it explicitly precludes both the President from making spending decisions by executive order. His eloquent ruling is a lesson in the value of America’s system of checks and balances:

No doubt the limitations imposed by the Tenth Amendment, like so many limitations imposed by the Constitution, are a source of frustration to those who dream of wielding power in unprecedented ways or to unprecedented degrees. But America was not made for those who dream of power. America was made for those with the power to dream.

Judge Hirsch explicitly framed his ruling as upholding the 10th Amendment’s check on federal authority to protect the rights of the people in line with a famous 1997 gun rights case decided by Scalia. That Montana case famously ruled that local officials didn’t have to comply with federal regulatory gun control mandates, even in a system that dictates that states and the federal government share responsibility.

“Miami-Dade County appealed Judge Hirsch to Florida 3rd District Court of Appeals (DCA) and it’s filed. The County is requesting an immediate stay on the judge’s order, but we continue to honor detainer requests until such time as the 3rd DCA rules.”

Haitian national James Lacroix, who is in the United States legally, served his sentence and should’ve been a free man, but the County held him for federal ICE agents to pick up anyway. The Miami Herald reports that Lacroix’s lawyer called compliance tantamount to cooperating with blackmail:

Lacroix pleaded guilty on Tuesday, ending his jail term. But he was not released from custody. Rather, Miami-Dade jailers kept Lacroix jailed for 28 hours until federal agents picked him up from the county’s main detention center.

“It’s nothing more than the federal government threatening and blackmailing states and Miami-Dade County,” said Philip Reizenstein, an attorney for a Haitian national slated to be sent home from Miami after he rang up a series of traffic offenses. “Hold somebody illegally or you’re not going to get the money that we would otherwise designate to you.”

The Mayor’s spokesman, Michael A. Hernandez blames a lack of national immigration reform laws on the messy situation which is harming people in the majority immigrant community:

“The County’s position is that this matter should not be settled in the State courts, but rather a Federal issue. We will pursue all levels of appeal until our legal options are exhausted.”

“Our position is that we comply with Federal Law and we need clarity. If Congress would pass immigration reform – which is long overdue – it would provide local officials with that clarity. We do not direct our police to enforce federal immigration laws.”

If the ruling is appealed all the way up the ladder, it will go next to Florida’s Supreme Court, then to the U.S. Supreme Court who would have final jurisdiction to answer a Constitutional question raised under state law.

“The Mayor, Donald Trump the Gimenez 9 on the County Commission can ignore their community,” said Miami-Dade Democratic Party Chairman Juan Cuba, “but they can’t ignore the constitution, and the courts.”

LACROIX vs. JUNIOR – ORDER ON PETITION FOR WRIT OF HABEAS CORPUS by Grant Stern on Scribd