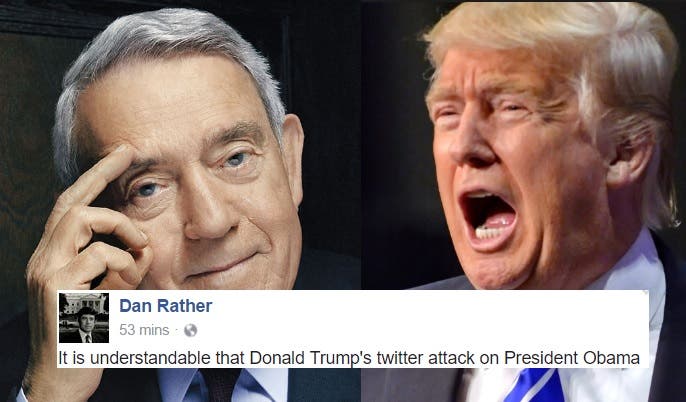 Six Russian Diplomats Have Mysteriously Died Since The Election

Today, President Trump was hoisted by his own petard when his Twitter attacks on President Obama backfired in a spectacular way.

By accusing President Obama of wiretapping Trump Tower during October 2016, he inadvertently appeared to confirm the existence of a suspected Foreign Intelligence Surveillance Act warrant that provided for the monitoring of communications out of Trump’s campaign headquarters (which were based in Trump Tower so that Donald could funnel campaign funds into his own pocket) due to suspected collusion with Russian agents.

Legendary journalist Dan Rather took to Facebook this afternoon to share his thoughts on the events in a heartfelt and thought-provoking essay:

It is understandable that Donald Trump’s twitter attack on President Obama early this morning would immediately be consumed by the churning political hurricane that is America today.

The deepening divisions that are pulling at the fabric of our nation are on raw display. On one side we see understandable outrage, with many questioning the mental fitness of our Commander and Chief. On the other side we see Trump’s allies rallying under their shared hatred of our previous President.

Perhaps it is my age or experience, but I feel no schadenfreude or eagerness to say, “I told you so.” I feel only a deep and abiding sadness. This is my country that I love with all my heart. We are a weakened nation, in our own estimation, and that of the world. If this was happening in some distant land, we would shake our heads and thank our lucky stars that we are Americans. But this nightmare is happening here, and we have no choice but to confront that disorientating truth.

My reporter’s instincts make me wonder at Trump’s actions. It has the feeling of a classic smokescreen. What is he hiding? Is this a kind of trap? Does he have something he is about to drop? Or does he know something else is about to drop on him and his administration, which is facing a withering crescendo of scandal?

We must carefully separate what we know to be true, from what we think to be true, from what we do not yet know. And in the early days of a story like this, what we do not know will far outpace the other two. We do know that there were numerous contacts between close aids to Donald Trump and senior Russian officials at a time when all indications point that the Kremlin was actively trying to undermine the integrity of our election.

What we don’t know is what these discussions were about. We do not know what is in Mr. Trump’s tax returns, which he seems so hell bent on hiding. We do now know all the other suggestions of links between Mr. Trump and people close to him and Russia. And then, of course, we do not know what else there is to know.

It is long past time that we have a complete and independent bipartisan investigation, especially since the director of the FBI is under such a cloud of political manipulation. Now is the time to breathe the cool winds of impartiality and facts. We need statesmen of steady head and temperament, willing to put country ahead of politics. We cannot afford for our democratic institutions to be consumed by a bonfire of lies, innuendos, and conspiracy theories.

We can all work ourselves into fervers of indignation. But the only antidote to these deep and understandable anxieties is the truth. We are the people of the United States. Our great nation is in a perilous moment, and the world is watching with great unease. We want the truth. We demand the truth. We can handle the truth.

His conclusions are being echoed by every clear-headed and informed American. President Trump has fought too hard and too long to try to discredit, dismiss, or deflect from the allegations of treason leveled against him, his cabinet, and his campaign team.

Every week, there’s another string of revelations that reveal previously concealed connections between the Trump team to agents of the Russian Federation.  Every week, the Trump administration claims innocence but never explains why they were hidden in the first place.

This latest bombshell, delivered to the entire world by Trump’s own tiny fingers and his intractable need for petty vengeance, is just another skull that has rolled out of the ossuary that is Trump’s closet.

If President Trump and his team are guilty of colluding with foreign agents to subvert our democratic process, they must be punished accordingly.

If President Trump is really being blackmailed by the Russian Federation as many believe, it would mean that the man in the Oval Office is a threat to our national security.

If the Republican Party has knowingly aided, abetted, and sought to conceal evidence of this treason from the American people – as their own behavior would indicate –  they too must pay the price.

We need an independent prosecutor and a bipartisan commission to get to the bottom of this as soon as possible.