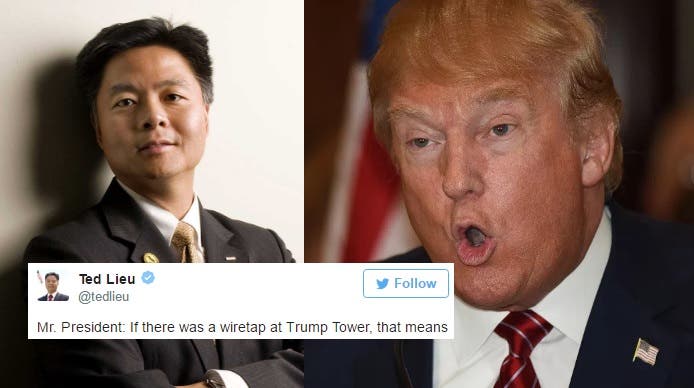 The President spent the early morning hours today proving why the majority of Trump’s advisers wish he would stop tweeting. But luckily for the American people, Donald Trump didn’t understand the true implications of what he was telling the world.

National security reporters have noted that the President just declassified a key part of the inquiry into his own administration and political campaign.

Mr. President: If there was a wiretap at Trump Tower, that means a fed judge found probable cause of crime which means you are in deep shit. https://t.co/i7dUMtHXmo

As we reported on the eve of the November elections, a FISA warrant to investigate the Trump campaign was issued in October, because of a secret email server in Trump Tower that was being used to communicate with Alfa Bank, who was later named in the Trump Russia dossier.

According to former British member of Parliament Louise Mensch, who originally broke the story of a FISA warrant, there was a lot of information gathered on Russia’s connections to the Trump campaign, but none viewed by the FBI’s counter-intelligence teams until the warrant was issued.

So to be quite clear, CIA had a lot of this stuff from MI6 / EU before Oct 15th FISA, but could not give to Comey pre-warrant.

We reported then that only the President can declassify the contents of a FISA warrant, and today’s events have proven that report to be accurate.

6. Natsec reporter @KenDilanianNBC says: "If it's true there was a #FISA [warrant] to get coms at #TrumpTower, Trump just declassified it."

Given how many Russian mafia scams, some #YUGE, have been run out of Trump Tower over past 25 years, safe bet the FISC said, "Them AGAIN?!?"

But Schindler’s appraisal of Donald Trump’s strategic handling of the criminal espionage investigation that’s consuming his fledgling presidency less than six weeks after it began is nothing less than chilling:

It just wasn't all that smart to attack spies & press — who dig up stuff for a living — when you colluded with the Kremlin to get elected.

Maybe, Donald Trump will one day realize that calling out his own Central Intelligence Agency un-American and comparing them to “Nazis” after colluding with foreign powers to get into office was a mistake.

But it takes a lot of intelligence to recognize one’s own inadequacies, which is why the Dunning-Kruger effect’s conclusion that incompetent people – like President Trump – are incapable of judging their own shortcomings.

Perhaps, one day former President Trump will look back upon this morning – when he decided to get onto Twitter and expose to the whole world that his unsecured phones at Trump Tower were tapped, while he cut dirty deals to enrich himself – and realize that it was a major admission that led directly to his own downfall.

At least you can count on him becoming a former President sooner rather than later after today’s bombshell admission by Trump.