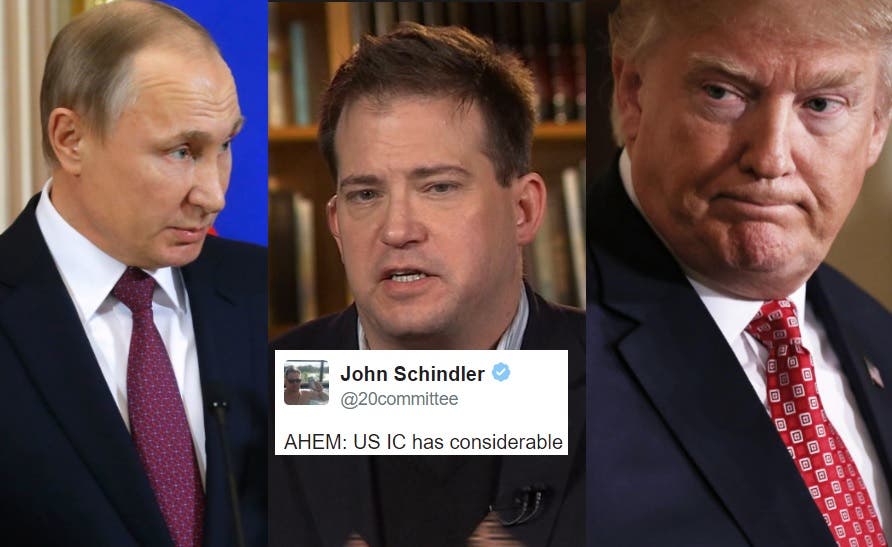 Schindler publishes a regular column at the New York Observer when he’s not debunking Trump’s myths about a “deep state” or selectively leaking what the secretive spy agency’s operatives really believe about our wayward new President.

While most of the media speculates about Trump’s Russian ties, John Schindler has inside access to the NSA and believes that they’ve already got enough evidence to prove that Putin’s election meddling was a cooperative affair.

AHEM: US IC has considerable SIGINT featuring high-level Russians talking about their collusion with Team Trump.

You heard it here 1st.

In this tweet, “IC” refers to “intelligence community” and SIGINT refers to “signal intelligence” – information obtained from intercepted signals from either person-to-person communications (COMINT) or electronic signals (ELINT).

Individually these convos are not all that persuasive, analytically; but collectively, they demonstrate collusion.https://t.co/hNAbmSRlUp

SIGINT is from #NSA & partners. This is called "reflections" in spookdom, ie readouts from convos about current ops.https://t.co/rEPGcn5fMD

In this next tweet, BLUF refers to the “Bottom Line Up Front” method of delivering information, which places conclusions and recommendations before supporting facts.

BLUF: 1 intercepted convo between 2 senior Kremlin guys talking about collusion w/Trump isn't a big deal; a bunch of them = a very big deal.

Here, Schindler refers to his sources inside the NSA and both his former position. The tweet is shared with former British member of Parliament Louise Mensch, who first reported on a possible FISA warrant issued to investigate the Trump campaign last October, which both the BBC and The Guardian later confirmed. I only tell you folks things about the IC, esp WRT something #YUGE like #TrumpRussia, when I personally know the spooks telling me the news.

This former high-ranking intelligence official believes that the Trump-Russia affair will not only end the current Administration, but there will be prosecutions as well:

I'm confident that any SERIOUS investigation of #TrumpRussia will find enough intel to end Trump's admin & send people to jail.

Ideologically, John Schindler is conservative and has no reason to help Democrats, which he proved amply by doggedly pursuing stories and firing off tweets about Hillary Clinton’s emails in 2015, before the matter was later cleared, after much consternation.

Intelligence doesn’t have a partisan angle, it’s all about facts. Listening to Russian officials discuss how they slam-dunked America’s democracy with the Republican nominee’s coordination can only lead any intelligence analyst to a singular conclusion.

It’s without a doubt now that President Trump is in deep trouble, having bullied his way into the White House with the assistance of a foreign power.

The unhinged real estate developer is compounding his problems by tweeting slander at President Obama and making up stories that at worst implicate him in the crime of the century, and at best prove that he’s unfit to remain in office.

If John Schindler’s tweets are as accurate as they are authoritative, the end of the Trump regime may happen in the near future.

The alternative is grim:

Because what America really needs is our own President Erdoğan.

This tweet refers to the President-dictator of Turkey, Recep Tayyip Erdogan, who responded to a failed military coup attempt last June by arresting 40,000 people, focusing on journalists, teachers, judges, and members of the military.