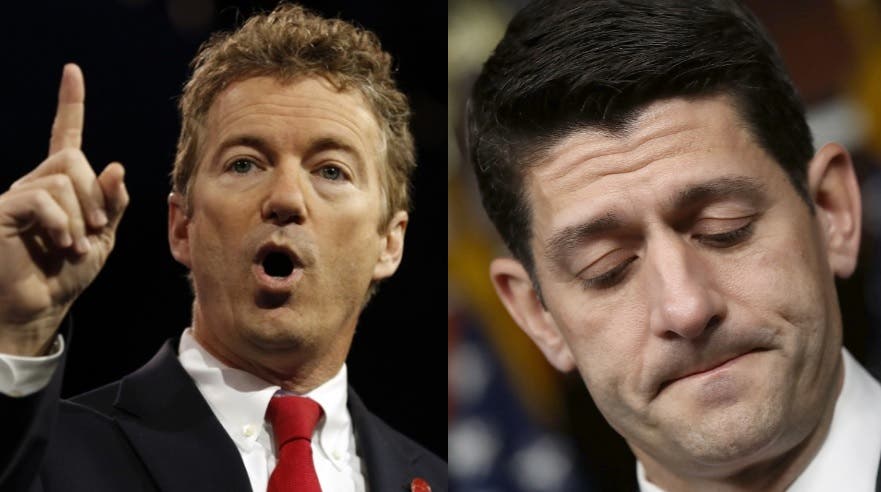 House Republicans released their Obamacare replacement bill this week and are immediately facing a firestorm of criticism – with most of the blowback coming from their own party.

Congressional Republican leaders Rep. Paul Ryan (R-WI) and Sen. Mitch McConnell (R-KY) are determined to rush the “Trumpcare” bill into a rapid Senate vote before anything can be done to examine its contents.

It’s as if they’re selling America on a big real estate deal, and we can’t even look at the backyard of the house, let alone walk inside to check if there’s running water or an AC system.

But House Republicans aren’t exactly thrilled about Trumpcare, mainly because they don’t want to help anyone obtain health insurance. Because the GOP plan calls for keeping some of the Obamacare provisions that actually help Americans, they’re calling Trump’s plan a new flavor of Obamacare.

Rand Paul declared “I don’t think it’s ever going to arrive in the Senate. I think it’s dead on arrival in the House.”

A House aide echoed that sentiment, saying “The bill’s dead. Too many conservative groups are coming out against it. There’s no way they’ll have the votes to pass it in its current form,”

Even the astroturf Tea Party groups and the neoliberal thinktanks behind them have all declared their opposition to the bill, as noted by Joan McCarter at Daily Kos:

The Koch brothers’ Freedom Works calls it “Obamacare-lite.” They don’t mean that in a positive way. Heritage Action says it is “bad politics and, more importantly, bad policy.” Even Gov. Paul LePage (R-are you kidding me, Maine?) says House leadership needs to “rethink what they’re doing” on this. CATO, the libertarian think tank that hates Obamacare calls it “Obamacare-lite—or worse.”

But what about the Republican votes? A staff memo for the 170-member conservative Republican Study Committee calls it “a Republican welfare entitlement.” It goes on to say that “Writing checks to individuals to purchase insurance is, in principle, Obamacare.”

Republicans only have 52 votes in the Senate, so if they lose three votes, they can’t even repeal Obamacare’s financial components, let alone replace it with anything, which will require 60 votes.

The GOP hasn’t got any room left to maneuver with its base after spending the last seven years promising a rapid repeal of Obamacare while angry constituents are literally kicking Republican legislators out of their offices with protests for ducking questions about health care.

Republicans cannot repeal Obamacare without damaging the entire US health care system, nor can they fulfill Trump’s promises to the 46% of voters he blatantly misled by promising universal coverage and cheaper care.

But Republicans are showing their true colors by refusing to even entertain the thought of keeping some of the provisions of Obamacare that millions of American people rely on for their healthcare.

Something will have to give soon, and a hefty group of Republican voters scorned may soon realize that their leadership has been lying to them about Obamacare for all these years.