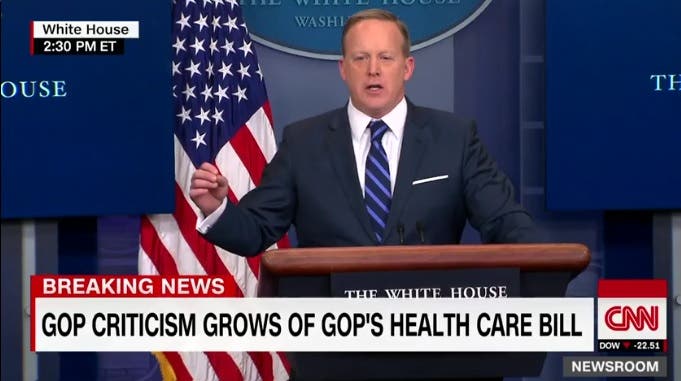 As expected, the new bill will make health care unaffordable for millions of Americans while cutting costs for the richest Americans and costing the government billions of dollars.

But don’t worry, America. Look how small the bill is!

“Look at the size! This is the Democrats, this is us. You can’t get any clearer than that” said Press Secretary Sean Spicer this afternoon, pointing to two stacks of paper in response to a reporter’s question.

There are papers on the table people this is not a drill. pic.twitter.com/82b4X9NxIk

Yes, once again, the Trump team has demonstrated not only their love for useless props during press conferences but also reminded us of the administration’s obsession with size in an idiotic attempt to make their appalling Obamacare replacement palatable to the American people.

Thankfully, this version of the “Trumpcare” bill is not likely to find its way through Congress, as it is opposed by Democrats for the catastrophic effects it would have on the American people and by the Republican “Freedom Caucus” for not being catastrophic enough.

Perhaps House Republicans and the White House should listen to what the American people actually want instead of resorting to such infantile pitches to justify taking away their health insurance. Trump’s bill may be smaller, yes, but that’s only because it doesn’t do anything except funnel money to the richest Americans.