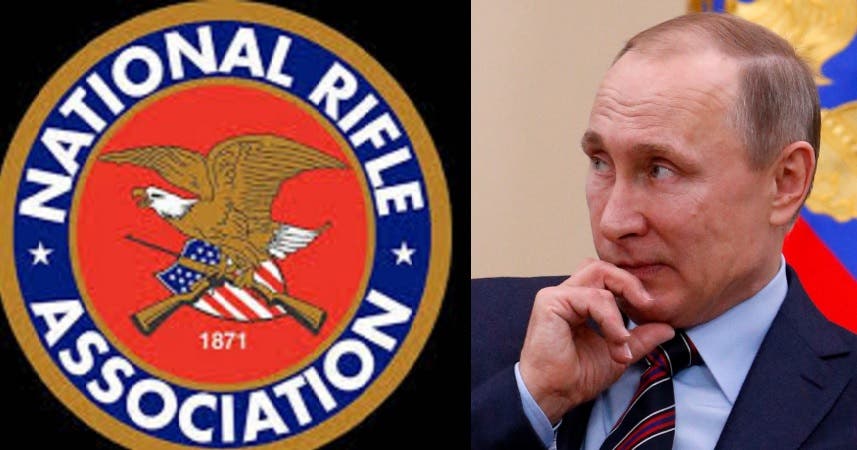 Trump Said He Respects Women, And It Just Blew Up In His Face

In December 2015, the National Rifle Association (NRA) sent a delegation to Moscow to meet with the prominent head of Russia’s defense industry and “hardline Putin deputy” Dmitry Rogozin. At the time, Rogozin was under American sanctions for his capacity as deputy Prime Minister charged with overseeing the defense space industries.

There is nothing illegal with the NRA meeting Rogozin so long as they did not talk business or sanctions. However, members of the House Intelligence Committee are not convinced that the encounter was purely innocent.

[In the tweet Rogozin says that he became acquainted with the NRA after Russia was named to host the 2017 Rifle World Shoot, a championship competition.]

Rep. Eric Swalwell (D-CA), who serves on the panel charged with overseeing the CIA, said,

“Russia is not America’s friend, and it’s stunning to hear that while they were attacking our democracy, one of the largest organizations supporting Trump was cozying up with a sanctioned Russian in Moscow.”

“It is disconcerting that they would be meeting [with a Russian official] about anything given their vocal support of the president. Due to the NRA’s opposition to sanctions, it defies credulity that they wouldn’t have discussed sanctions and their extraordinary support for Donald Trump’s campaign.”

One member of the NRA group was Sheriff David A. Clarke, a frequent Fox News guest beloved for his defense of police brutality and fallacious rants against the Black Lives Matter movement.

The Milwaukee County Sheriff is a rabid Donald Trump supporter. Recall that both Trump and the NRA strongly opposed President Barack Obama’s anti-Russia sanctions, including the sanctions targeting Rogozin. Clarke himself was also a vocal Obama critic, attacking virtually everything the former president did. Presumably he also opposed the sanctions.

Clarke filed a public disclosure form indicating that his NRA trip to Russia combined with an NRA trip to Israel came to a total of $40,000.

David Keene, the former NRA president who was present on the Moscow trip, insists that the trip and the meeting with Rogozin was “non-political.” The plausibility of this claim is dubious. In addition to meeting with a sanctioned Russian while publicly attacking the sanctions affecting him, the NRA was also a strong Trump supporter on the campaign trail.

Whether the NRA actually took any direction from the Trump campaign team is unknown. What is clear is that when Trump burst on to the political scene singing the praises of Russian autocrat Vladimir Putin, the NRA quickly switched from criticizing the Russian regime to defending it.

Is the NRA involved in the Trump-Russia scandal? Why was it meeting with a sanctioned Russian politician during the Kremlin’s hacking of the 2016 U.S. election? Nothing is provable yet, but the circumstances are suspicious.