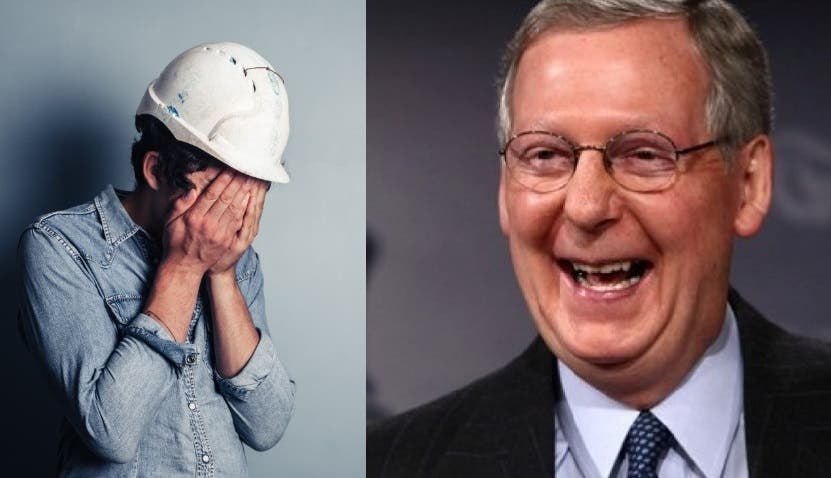 In a party line vote, all 49 Republicans present decided to sideline the Fair Pay and Safe Workplaces Rule by using the Congressional Review Act. It’s the same law which President Trump and the GOP used to block rules meant to keep mentally ill people from buying guns.

Presuming that President Trump signs the legislation – and if it hurts workers’ rights, that’s a near certainty – this Republican Act of Congress greases the skids to give fat government contracts to abusive employers who steal wages from workers or those with hazardous workplaces. The Huffington Post reports:

Obama’s rule would have required companies seeking federal contracts to disclose violations of labor law — including minimum wage, overtime, and health and safety statutes— over the previous three years. Federal agencies would have been able to consider those violations when doling out contracts.

Following in the footsteps of House Republicans, GOP senators used what’s known as a “resolution of disapproval” under the Congressional Review Act. The obscure procedural maneuver requires only a simply majority, meaning Senate Democrats had no hope of stopping it through a filibuster. In passing the resolution, Republicans not only killed the rule, but also made sure the Labor Department never puts forward a similar rule again, unless Congress tells it to.

According to a new report (see below) by Massachusetts Senator Elizabeth Warren, the top 10 violators alone stole $68 million dollars worth of wages, which they were forced to repay to workers in 2015. The rule would’ve applied to 14,000 companies, which the Department of Labor says should not have more than a handful of serious violators.

Some companies which our federal government hires are vast, which means that the now doomed rule would’ve given a little extra protection to 20% of the American workforce. Senator Warren’s report concludes:

More than one in five U.S. workers is employed by a federal contractor, and these contractors receive around $500 billion in taxpayer funds each year. These contractors do important work, from building and protecting the government’s information technology systems to securing nuclear waste. But this analysis finds that they frequently underpay workers or illegally put their health and safety at risk.

In an effort to improve conditions for these workers, President Obama put new protections in place, guaranteeing that contracting officers would have the information they need to assess whether a contractor has violated the law in the past, and ensuring that the employees of contractors earn a living wage, can take sick days without losing their job, and can work in an environment free from discrimination on the basis of sexual orientation or gender identity.

The Obama Administration spent eight years working doggedly to protect American workers while they’re on the job, and to safeguard their paychecks.

It appears that the right to get injured on the job, and to have your hard earned wages stolen by your boss is what Donald Trump really meant by promising Republicans that his regime would be all about “putting America’s workers first.”