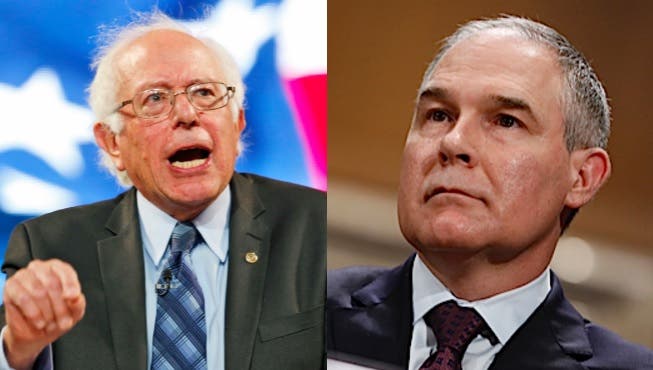 The dark carnival that is President Donald Trump’s administration, which oozes incompetence, continues to sink to previously unfathomable depths of ignorance.

Trump’s newly appointed head of the Environmental Protection Agency (EPA), Scott Pruitt, said with a straight face, that he does not believe in the resounding agreement of scientists regarding climate change.

Sen. Bernie Sanders (I-VT) proceeded to destroy Pruitt’s argument by proving Pruitt to be the scientific charlatan he truly is.

Pruitt’s unbelievably stupid comment came while he was a guest on CNBC. He was asked, “Do you believe that it’s been proven that C02 is the primary control nob for climate?” Pruitt then drooled the following nonsense out of the gaping hole in his head:

I think that measuring with precision human activity on the climate is something very challenging to do and there’s tremendous disagreement about the degree of impact, so no, I would not agree that it’s a primary contributor to the global warming that we see.

Relive that precious moment below:

By making such a comment Pruitt placed himself, publicly, in a disagreement with the very agency he heads. On the EPA’s website it says:

Carbon dioxide is the primary greenhouse gas that is contributing to recent climate change.

In short, Pruitt is a fool and Sen. Bernie Sanders was not going to allow this moment to pass without reminding the American people of how ridiculous, and more importantly dangerous, Pruitt sounds.

While a guest on CNN Sanders said:

I wish I could come up with another word — it is pathetic — that that is the position of the administrator of the Environmental Protection Agency. The debate is over. Something like 97 percent of the scientists who have written peer-reviewed articles on the subject agree that it is human activity and CO2 emissions that are causing devastating problems already in the United States and around the world

If Pruitt were still the Attorney General of Oklahoma and was not in charge of protecting the nation’s environment that would be one thing. However, as Sanders pointed out, “That you have the Trump administration continuing to deny the reality and the horrors that the climate change is already causing, is very sad indeed.” the truth is far scarier.

While the world continues to see temperatures breaking records year after year, with natural disasters growing larger and causing greater damage than ever before, for the individual who’s in charge of protecting the environment for American people to be so woefully and welcomingly ignorant of the realities the entire world faces would be comical if it weren’t so tragic.