Donald Trump’s sleaziest political operative just got caught colluding with the Russians, and The Smoking Gun put together all of the proof.  Roger Stone is a pathological liar and long-time voter suppression operative, whose influence on the Trump campaign grew after longtime partner Paul Manafort was brought in to replace Corey Lewandowski over the summer.

A series of tweets reveal that Stone’s longtime claims of a “legitimate back channel to Assange” at Wikileaks was actually the Russian hackers who acted as middlemen disseminating stolen Democratic Party information for publication:

Contact between Roger Stone, the Trump associate, and the Russian influence operation came via private messages exchanged on Twitter, according to a source. Stone’s contact was with “Guccifer 2.0,” an online persona that U.S. officials say was created by Russian government officials to distribute and publicize material stolen during hacks of the DNC, the Democratic Congressional Campaign Committee, and Gmail accounts used by Clinton staffers like John Podesta, the campaign’s chairman.

A U.S. intelligence assessment concluded with “high confidence” that the G.R.U., Russia’s military intelligence service, was operating the “Guccifer 2.0” persona.

In early August, Roger Stone told Florida Republicans that he had conferred with Assange (bottom of story) and then in October he probably lied to Miami’s CBS affiliate, saying that he had a friend who traveled to London to pass messages.

Clinton campaign chairman John Podesta accused Stone of collusion after he announced the releases, shortly before his hacked emails were publicly disseminated by Guccifer 2 and Wikileaks as part of the Russian government’s plans to help Donald Trump.

It’s important to note for non-Twitter users; the service has a private, Direct Messaging service that anyone can use to communicate, similar to a universal phone book for text messaging. Twitter users can only send these private messages to people who are following them, which Guccifer 2 conveniently did do, according to TSG:

In late-July, “Guccifer 2.0” began following Stone, the only Trump World figure among the small group followed by the hackers.

As you can see from their tweets in August, perhaps Roger Stone forgot that the whole world can see what you say on social media. More importantly, we can see what the Russian hackers said as well. 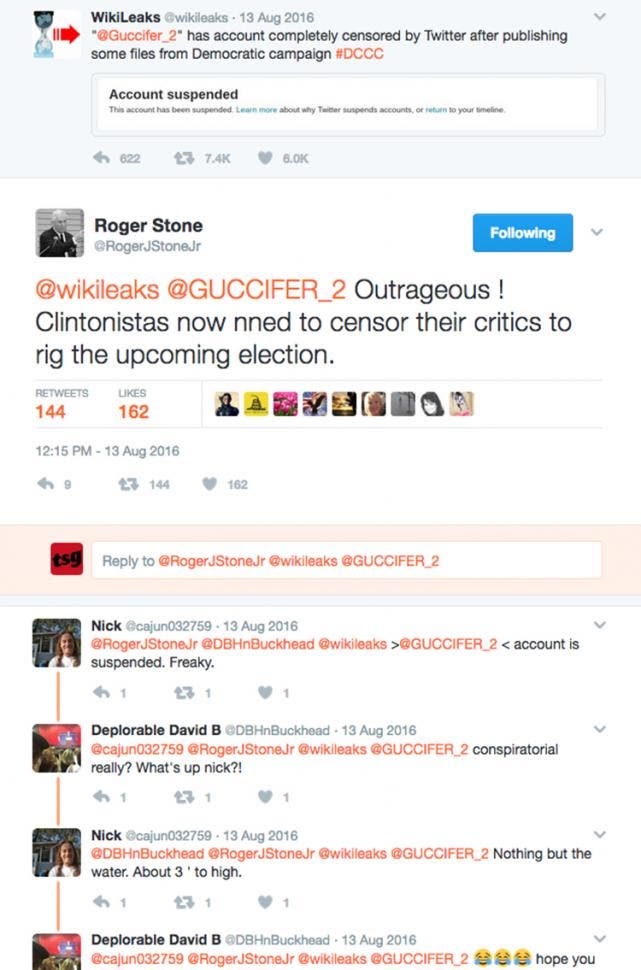 Twitter hasn’t been very good lately to Stone – who’s been infamous since becoming youngest person hauled in front of Watergate grand jury – had a massive Twitter meltdown and encouraged a behavioral scientist to sue him for libel.

Ironically, it turns out that Roger Stone will be in court later this month because he is being sued for libel for dirty tricks in the 2010 New York Governor’s race.

“I think this fits a pattern with Stone. Every once in awhile he loses it and shoots himself in the foot,” says plaintiff, attorney Warren Redlich. “He did it with Spitzer and also with the Dole campaign.”

Roger Stone purportedly left the Trump campaign in August 2015, but as we’ve seen with many Trump allies, departure is rarely, if ever, permanent, and more often an obfuscation than a meaningful separation.

Stone resumed campaign operations to run a shady PAC that coordinated efforts so closely with the Trump campaign that both were slapped with a federal restraining order in Ohio for voter intimidation. TSG reports:

When Lewandowski was fired by Trump last June, Stone rejoiced since his ex-partner Manafort was taking over as campaign manager. After Lewandowski was deposed, reporter Matt Labash wrote in The Weekly Standard, “Stone called me, singing ‘Back In The Saddle Again.’”

Stone initially denied placing the ads, claiming that they were the work of a “very sick individual.” But years later he admitted to The New Yorker that the ads were authentic, and described himself as a “libertine.”

Roger Stone has always been a disgusting political operative, but working with Russian hackers crosses the line from political cheating to crime.

The Trump-Russia Christopher Steele dossier said that Wikileaks was chosen to release the emails Russia stole from Democrats for its plausible deniability, but there’s no plausible way to deny that Roger Stone has just named himself publicly as the middle-man colluding between the Trump campaign and Putin’s minions.