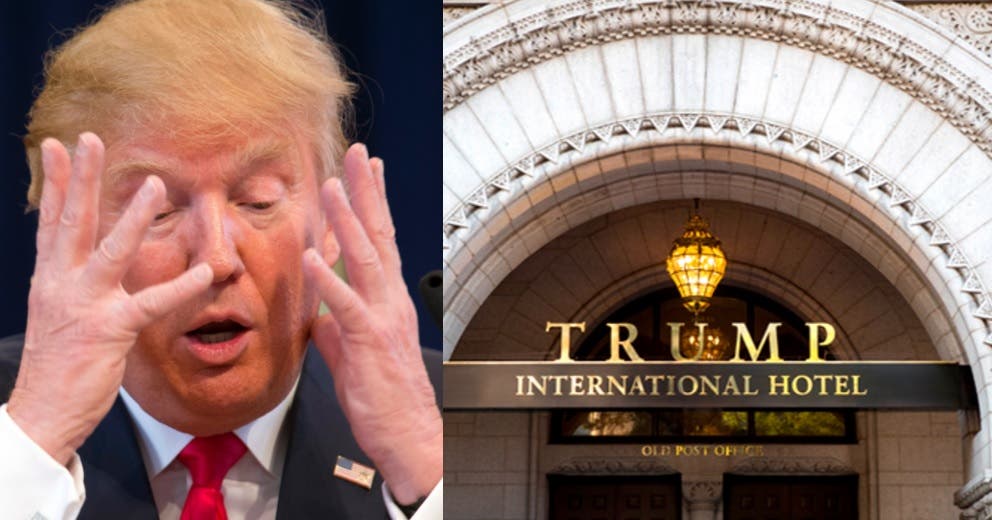 Two Washington, D.C. small business owners have thrown a legal ultimatum at President Donald J. Trump; either resign from the Presidency, divest fully from the Trump DC Hotel, or shut it down for the duration of his public service.

Diane Gross and Khalid Pitts are suing Donald Trump for unfair business competition because Trump’s use of government property while in office is crowding out revenue from private business in the area (full complaint below). The litigants released an official statement explaining that the lawsuit doesn’t ask for any monetary compensation, just an order to give relief for all of DC’s business community:

The lawsuit was filed by a team of District of Columbia attorneys and law professors for the express purposes of seeking judicial intervention to prevent unfair competition, and to seek an Order from the Court remedying the unfair competition of the Trump International Hotel. Neither the Plaintiff nor the attorneys are seeking any monetary compensation, and merely want the Court to ensure a level playing field for DC businesses.

The two plaintiffs are a married couple and run a wine bar nearby the Trump DC Hotel, but have suffered a loss of business in the wake of inauguration and are suing because the President’s Hotel is drawing away people doing government business as a way to gain favor with Trump.

Legal experts have already opined that Donald Trump cannot hold the lease on his DC hotel and be the landlord at the same time.

The Washingtonian reports that it has become common knowledge to locals that foreign dignitaries are favoring the Trump property:

Plenty of stories have been written about the Trump hotel becoming a destination for those looking to gain favor with the president. In November, the Post covered a gathering over about 100 foreign dignitaries at the hotel. “Why wouldn’t I stay at his hotel blocks from the White House, so I can tell the new president, ‘I love your new hotel!’ Isn’t it rude to come to his city and say, ‘I am staying at your competitor?’” one anonymous diplomat told the Post. Trump has previously said hotel profits from foreign governments will be donated to the US Treasury, but it’s unclear exactly how that’s working in practice.

“It’s our position that the Trump organization and Trump himself are using those conflicts of interests to get an unfair advantage against DC businesses,” said lead counsel Scott Rome.

Gross and Pitts are being represented in court by something of a legal all-star team including the Associate Dean of George Washington University’s School of Law in charge of public interest and public service education. They are working pro-bono, according to the USA Today.

Once again, Donald Trump has been hauled to the courthouse for yet another civil lawsuit sparked by his refusal to sell the Trump brand and properties to quell his limitless conflicted interests.

President Trump is already entangled in another anti-corruption lawsuit caused by the Hotel under the Constitution’s Emoluments Clause and yet another legal action by celebrity chefs Jose Andres and Geoffrey Zakarian, who are seeking to break a contract to open a restaurant there after The Donald insulted all of Mexico kicking off his presidential run.

Sane citizens can only hope the situation of lawsuits against Donald Trump multiplying faster than Republican legislative successes continues indefinitely. There’s certainly no shortage of Americans directly harmed by Donald Trump and his casual, daily flaunting of the law.

Cork vs. Trump by Grant Stern on Scribd