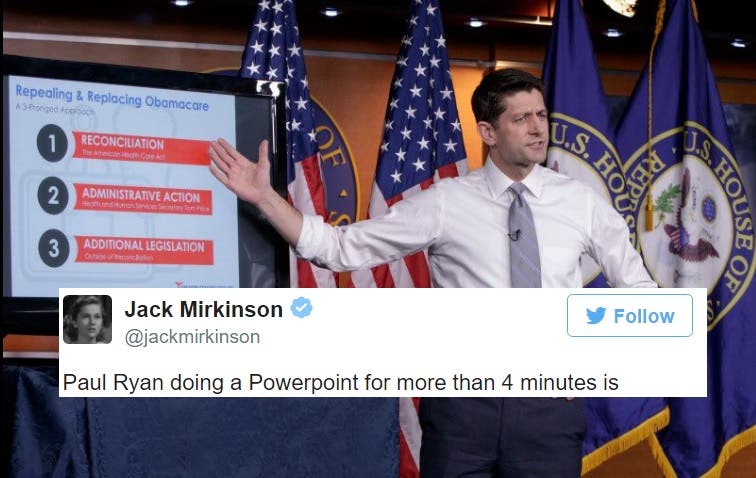 Today, House Speaker Paul Ryan began a concerted effort to sell his appalling “Trumpcare” plan to his own party members at his weekly press conference.

After months of lies about the effectiveness of the Affordable Care Act, Ryan rolled up his sleeves and brought out the big guns – a PowerPoint presentation:

#business #retail Paul Ryan just gave a PowerPoint presentation with rolled up sleeves amid backlash over the GOP'… https://t.co/fASuI9bzLV

Naturally, Twitter immediately erupted in a wave of scorn and derision at Ryan’s pitiful attempts to smear lipstick on the gluttonous snout of his $600 billion tax break for the wealthy masquerading as a healthcare plan:

Caught the tail end of @SpeakerRyan’s powerpoint presentation, and I have to say, I’m a little concerned. pic.twitter.com/vScaYT2LOs

Only been watching this Paul Ryan PowerPoint presentation for 2 minutes, and I can already tell it'll be an even more hilarious SNL skit.

I hope Paul Ryan has some snazzy clip art for this powerpoint presentation: "Here's a giant elephant literally fucking the poor, next slide"

Apparently Republicans love Paul Ryan because he uses PowerPoint presentations. What does Mitch McConnell use, Etch a Sketch?

Paul Ryan’s PowerPoint was just a platform for him to repeat the same old Republican lies about Obamacare and peddle his Ayn Randian screw-the-poor philosophy to the still unconvinced Tea Partiers.

As opposition mounts from Democrats, healthcare professionals, and radicals within his own party, Ryan and Trump are going to have to do more than give a fifth-grade social studies presentation to sell this bill.