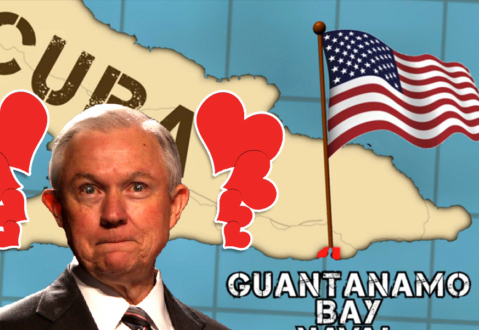 When Jeff Sessions isn’t busy firing every United States Attorney left in the Department of Justice, he still has plenty of time to appear on right wing talk radio to tell everyone what a fine place Guantanamo Bay is for recently captured terrorists.

Sessions went on the Hugh Hewitt show on Thursday to tell the conservative radio personality that not only did he not favor closing down the detention center at the US military base in Cuba, but also that he’d recommend that President Trump send newly captured prisoners there as well.

“I’ve been there a number of times as a senator, and it’s just a very fine place for holding these kind of dangerous criminals. We’ve spent a lot of money fixing it up. And I’m inclined to the view that it remains a perfectly acceptable place. And I think the fact that a lot of the criticisms have been totally exaggerated.”

Former President Barrack Obama famously pledged to shut down the military prison while he was campaigning for office, but was unable to ever fulfill that promise due to opposition from Congress. Former detainees have described being subject to interrogation tactics at Gitmo that were tantamount to torture. Both Amnesty International and the United Nations have advocated closing the base, which held as many as 779 prisoners at its peak.

By the time Obama took office, that total was down to about 245, and the number dwindled to 41 prisoners at the current moment. Most prisoners were eventually freed and sent to other countries.

On Tuesday, President Trump addressed the role of Guantanamo Bay in one of his infamous tweets:

“122 vicious prisoners, released by the Obama Administration from Gitmo, have returned to the battlefield. Just another terrible decision!”

That means that Sessions was correct when he told Hewitt that “There’s plenty of space” at Gitmo for newly captured terror suspects. Of course, when you consider that many of the remaining prisoners at the facility have been held captive for up to 15 years without ever facing an actual trial, you have to question the judgment of the man who is supposed to be leading the Department of Justice.