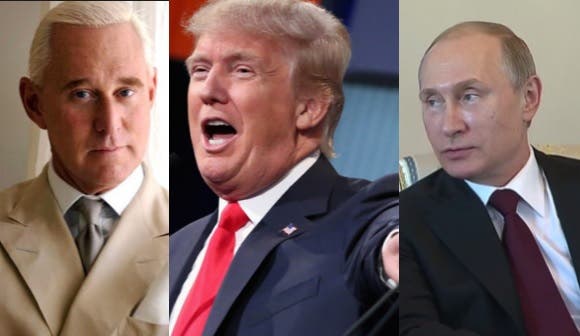 Donald Trump’s former campaign adviser has admitted to a conservative Washington DC newspaper that he colluded with the Russian hacker group  officially thought to be responsible for the DNC email thefts, Guccifer 2.0.

Roger Stone confessed to the Washington Times that he was sending Direct Messages on Twitter, which are private, to the Russian hackers:

“It was so perfunctory, brief and banal I had forgotten it,” the political consultant told The Times on Friday with respect to a private Twitter exchange he had with “Guccifer 2.0,” a pseudonymous entity explicitly tied to the DNC hack.

Stone’s admission explains why he was able to predict Clinton Campaign Chairman John Podesta’s emails were hacked, and due to be released in order to foster the climate of scandal, as well as embarrass the Democratic nominee in a laser targeted manner.

Six weeks before Podesta’s emails were released at the height of the campaign, Stone tweeted this telltale mark of foreknowledge:

Then, just days before Podesta’s emails leaked, Stone clearly had some inkling of the timing of the next Wikileaks releases:

Earlier this week, The Smoking Gun wrote a sensationally deep and well-sourced expose on Roger Stone earlier this week (which we covered here), and it was their disclosures which obviously prompted Trump’s dirty trickster to break down and admit the truth:

In one of the messages dated Aug. 14, Mr. Stone said he was “delighted” that Twitter had reinstated Guccifer 2.0’s account following a brief suspension. Two days later, Mr. Stone again privately messaged the Twitter account and asked for it to retweet a column he had written about the prospects of the 2016 presidential election being “rigged.”

The messages Roger Stone revealed aren’t themselves earthshaking, but they are conclusive in the sense of proving that collusion has taken place between himself and Russian hackers. Of course, Stone think’s it is “ok” admit to an innocuous conversation with Guccifer 2.0, but that leaves open the possibility of further communications on other channels.

More importantly, Stone’s disclosure to the Washington Times broke his first rule of politics: “Admit nothing, deny everything.”

If the FBI investigators looking into Roger Stone see his remarks, they might call them probable cause that a crime was committed.

Will Stone be arrested soon? We can only hope that the justice system will finally catch up with one of Trump’s criminal cronies.