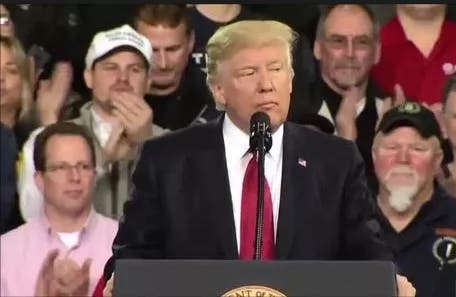 Donald Trump famously likes to bring a hand-picked audience to his speeches to ensure that his nonsensical ramblings are received with thunderous rounds of ego-soothing applause.

CBS Detroit just revealed that he’s still up to his old tricks. Trump appeared in Ypsilanti, Michigan today at the American Center for Mobility to announce his plans to revoke the Obama executive order mandating an average 54.5 mpg fuel efficiency for cars and light-duty trucks by 2025.

How did he ensure a positive reaction to a policy change that would make American cars more expensive to drive and reverse any progress towards slowing climate change? By bussing in an audience of paid autoworkers, of course.

Many of the autoworkers on site told WWJ’s Jeff Gilbert they were given time off with pay to attend the event, some of them brought on buses to the American Center for Mobility — the site of the old Willow Run bomber plant, west of Detroit.

Trump tries to position the regulations he is rolling back as being the culprits for the loss of American jobs but has presented no evidence that eliminating regulations would actually lead to a jobs increase.

In fact, less fuel-efficient vehicles would be less competitive in the worldwide auto market and cost the average consumer more to operate, as reported by ThinkProgress:

Trump’s misguided move to appease the ever-myopic U.S. auto industry would undo efficiency gains that will provide consumers $98 billion in total net benefits, primarily from reduced fuel use. Individual car buyers would lose “a net savings of $1,650” (even after accounting for the higher vehicle cost) as the EPA concluded in its final January “Determination on the Appropriateness” of the standards.

With no guarantee of additional jobs and a net loss to the average American consumer, no wonder Trump needed to bus in a bunch paid “supporters” to get the applause he seems to need so much.