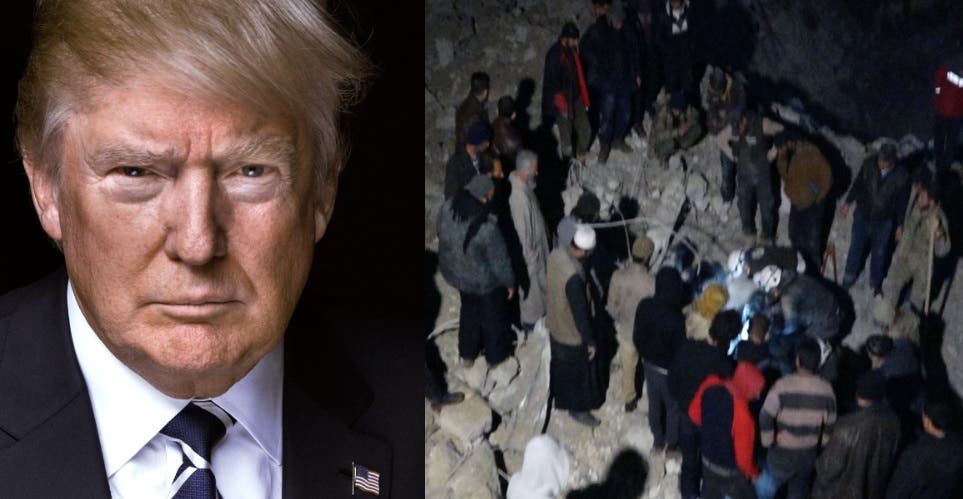 On the campaign trail, President Trump promised that he would “take out the families” of suspected terrorists. We now know that he was deadly serious.

Earlier today, the United States air force launched a unilateral airstrike against the Umar ibn Al-Khaṭṭāb mosque in the village of al-Jinah in West Aleppo province, Syria, during the evening prayers, which killed at least 57 and possibly as many as 70 people, wounding around a hundred worshippers. One room of the mosque was completely destroyed; rescuers are still trying to dig people out.

US Central Command has confirmed the airstrike took place, but has only said they are “investigating” the allegations of civilian casualties, in a typically vague statement.

At least 75 of them were killed today in multiple airstrikes on the ibn Al-Khaṭṭāb mosque in al-Jinā. Many still trapped under the rubble. pic.twitter.com/QUZTGHhwxM

The strike was targeting suspected militants belonging to al-Qaeda’s Syrian affiliate Jabhat Fatah al-Sham, but with over 300 worshippers present at the mosque, civilians were certain to die en masse – but Trump’s Pentagon went for it anyway.

Eyewitnesses say seven missiles were fired. The images coming out of Aleppo are horrifying to behold.

The strike was first believed to have been carried out by the Russians until rescuers found fragments of American missiles.

So remember Idlib drone strike in October 2016? It appears the same missile was used in the Al Jīnah mosque strike. h/t @EliotHiggins. pic.twitter.com/1v3tbVdXA7

The Pentagon has reportedly sought less restrictive “rules of engagement” for the war in Syria – and Trump has clearly given it to them.

Trump’s short tenure as President has seen innocent civilians slaughtered in droves. His first covert raid on Yakla village in Yemen led to the deaths of 30 civilians, including ten children, in what witnesses described as a “massacre.”

Syrian state media and the “Raqqa Is Being Slaughtered Silently” activist group also allege that a US airstrike on March 11 killed as many as 17 civilians, many of them children.

Now the United States military is using the same tactics used by the Russians and the Saudi Arabians in their “war on terror” – bombing civilian locations to get a few suspected terrorists.

#pt: No underestimating the damage this apparent US strike in Al-Jinah will have done – rebels now equate US w. #Russia & #Assad. Dangerous.

Trump’s nihilistic disregard for human life is horrifying to behold; not to mention counterproductive in the extreme. Nothing will perpetuate the cycle of extremism and provoke plots of revenge against America quicker than brutally murdering innocents like this.

This is a war crime, plain and simple. Unfortunately, since Trump is intent on slashing all public programs to pour money into the military, it’s clear that it won’t be that last.

While the US CENTCOM says the airstrike was in Idlib province and the airstrike actually hit West Aleppo – a few kilometers over the border – Airwars’ Christiaan Triebert points to inaccurate US maps for the discrepancy.