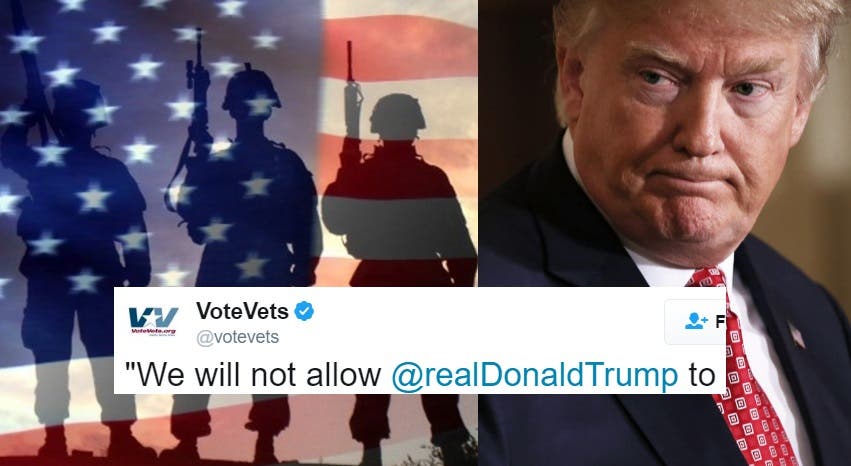 President Trump’s appallingly cruel budget proposal brutally slashes funding for every program that works to benefit the public and redirects all that money to the military and towards his impractical border wall.

But even our veterans aren’t happy to see another $54 billion dollars being thrown at the military instead of going to public programs that benefit all Americans – including veterans and their families.

The VoteVets activist group just released a scathing statement slamming Trump for his misplaced priorities, vowing that they would not allow Trump to “pit veterans and the military against everyone else.”

“As those who served this nation in uniform, we cannot be more clear – we will not accept increases to the VA Budget and DOD Budget, on the backs of the poor, seniors, and the security and safety of the American people. We will not allow Donald Trump to pit veterans and the military against everyone else.

We can pay for an increase in force structure, and more resources at the VA, while keeping important programs intact for seniors, working Americans and those Americans facing hard times. We can also fund programs that build alliances overseas, and prevent the climate disaster that General Mattis has deemed a top national security threat.

We can do that if Donald Trump would give up his ridiculous, overpriced wall, that American taxpayers will now be paying for, and if he asked the wealthiest of the wealthy, and corporations – his buddies – to pay their fair share. But that’s not what Donald Trump’s budget does.

Instead it tells Americans he believes an F-35 is more important than providing Meals on Wheels to an elderly woman starving to death in Georgia. He’s saying America must pick between new equipment at the VA or heating assistance for a family on hard times in states like Indiana who may freeze to death. His budget says we must pick between a naval fleet, or a safe, responsible, and accountable air traffic control system, to ensure safe air travel for millions.

These are choices we do not need to make. Donald Trump and the Republicans should be ashamed that they are forcing such an un-American budget down the throats of decent, hardworking Americans – many of whom are veterans, themselves.

This budget hurts us the same as it hurts everyone else, because veterans and military families do not live in a bubble.

We put our lives on the line to protect the very people this budget hurts, and we stand ready to fight for them, again, against this unnecessarily cruel budget.”

Founded in 2006, and backed by over 500,000 supporters, the mission of VoteVets.org is to use public issue campaigns and direct outreach to lawmakers to ensure that troops abroad have what they need to complete their missions, and receive the care they deserve when they get home. VoteVets.org also recognizes veterans as a vital part of the fabric of our country and will work to protect veterans’ interests in their day-to-day lives. VoteVets.org is committed to the destruction of terror networks around the world – with force when necessary – to protect America. While non-partisan, the group is the largest progressive organization of veterans in America.

The $52 billion increase in the military’s budget is larger than the entire military budgets of most other countries in the world and is one of the largest single-year increases in American history, at a level similar to spending at the height of the World Wars.

To pay for it, Trump is planning to drastically cut funding for the Environmental Protection Agency, the Public Broadcasting Corporation, the Treasury Department, the Internal Revenue Service, the Department of Education…if it serves the American people and provides necessary public services, it’s getting the budget axe.

A budget is a moral document; it lays out in stark terms what the White House believes is important and deserves to be cared for – and Trump’s budget demonstrates in no uncertain terms that the American people aren’t on his list of priorities. He’d rather funnel our tax dollars to arms manufacturers and the wealthiest Americans.

It’s hard to imagine a more sadistic use of the public’s money than to cut all the programs that provide vital services and to pour the money instead into purchasing weapons of war, which will inevitably be used to slaughter impoverished people in far-away lands and perpetuating the cycle of systematic violence that breeds terrorism and instability.

The men and women of our military risk their lives and limbs to defend the American people and people from harm – but it’s clear that the biggest threat to public well-being comes from the White House.