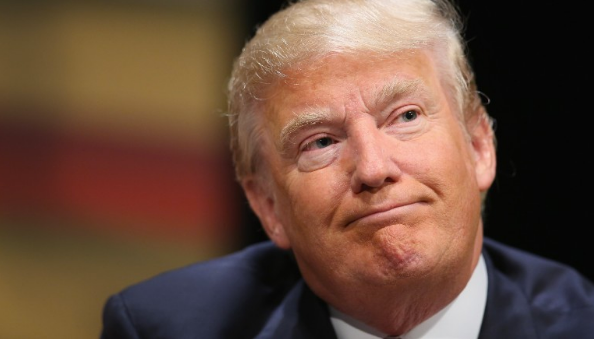 Donald Trump’s wealth fell by a billion dollars in the past year to $3.5 billion,  which is far below his campaign trail claim that he is worth $10 billion.

In its annual rankings of billionaires, Forbes Magazine reported today that Trump fell 220 notches from 2016 when he was credited with having $3.7 billion to tie with  19 others (including disgraced former L.A. Clippers owner Donald Sterling) as the 544th richest person in the world.

The decline in Trump’s fortunes came in the same year he became the first billionaire to be elected President. His fall was not because he invested about $66 million in his own campaign, or the $25 million fine he paid to settle allegations that Trump University was a giant scam. It was because the value of the ten building he owns in New York City, including Trump Tower, have declined.

“Forty percent of Donald Trump’s fortune is tied up in Trump Tower and eight buildings within one mile of it,” according to the Forbes article. “What happens in that micromarket does more to affect the net wealth of Donald Trump than anything else in the world. Lately, the neighborhood has been struggling (relatively speaking).”

When Forbes revealed the billionaire list last year, Trump complained that he wasn’t being given credit for how much he was really worth, which is when he made his claim to be worth $10 billion.

A Forbes editor told The Guardian in the U.K. that while Trump has complained in the past, he didn’t respond to a request for comment this year. “Over the last 31 years we have been compiling the list,” she said, “Trump has given us a lot of feedback, believe me. ‘You guys are too low. I am worth far more than you say’….He didn’t call back to to dispute our estimate [for 2017]. I would hope that running the country is more important to him right now than Forbes value of his net worth.”

Trump’s true wealth would be a lot easier to track if he would release his most recent tax returns; but since he refuses to do so, Forbes and everyone else can only estimate and guess.

Trump claims that he has turned over operation of his businesses to his sons, but has never actually shown he doesn’t still have a hand in the operations. The Trump Organization is privately held, so there are no public documents to examine.

While Trump’s fortune was down, it was actually a banner year for billionaires thanks to the stock market boom fueled (ironically) by Trump’s election, along with the growth of wealth in countries all over the world. China, for instance, had the most new billionaires who joined the 2017 list.

Forbes reported that there are 2,043 billionaires worldwide, compared to 1,810 last year. They have an average net worth of $3.75 billion, which means Trump is below average among the world’s richest individuals.

By coincidence, Trump was scheduled to meet today with Bill Gates, the Microsoft founder who topped the annual list with $86 billion in wealth, up from $76 billion last year. This is the fourth year in a row Gates has topped the list of the world’s billionaires.

Gates did not publically support Trump or Clinton during the campaign, although he had longtime ties to the Clintons and their foundation. However, the second richest person on the Fobes list with $75.6 billion, Warren Buffet, did support Clinton.

The third person on the list with $72.8 billion is Jeff Bezos, the founder of Amazon, and owner of the Washington Post, who did support Clinton. His newspaper was highly critical of Trump during the campaign and has continued to be so since.

So it turns out that despite his bragging and claims about his wealth, the size of his fortune is just more fake news. Like his hands, it is much smaller than he claims.