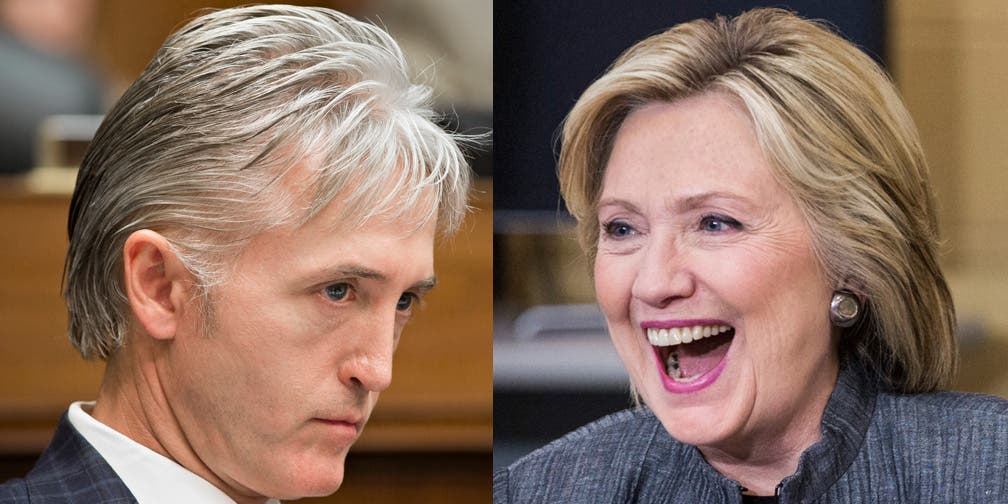 Republican Congressman Trey Gowdy (R-SC) became a right-wing media darling almost overnight when he was named Chairman of the House Select Committee on Benghazi in 2014.

As the head of this committee, the former prosecutor from South Carolina became the face of the GOP’s years-long campaign to pin the terrorist attack against the American annex in that beleaguered Libyan city – one that resulted in the death of four Americans, including Ambassador Chris Stevens – on then-Secretary of State Hillary Clinton in the run-up to the 2016 presidential election.

On Tuesday afternoon, a complaint was filed with the Office of Congressional Ethics against Rep. Gowdy, requesting an investigation into the South Carolina congressman  “…for accepting $6,000 in political action committee contributions from Anti-Hillary Clinton groups while investigating her.”

The ethics complaint, filed by the Democratic Coalition Against Trump, details how the three $2,000 contributions came from conservative groups affiliated with Stop Hillary PAC – a group that also  “…spent [an additional] $10,000 directly in support of Rep. Gowdy.”

Gowdy took payment from these groups in 2015 – while he was the Chairman of the Select Committee investigating the former Secretary of State.  He tried to defuse the situation in October of that year by returning the donations in question ahead of a Washington Post story exposing them.  Stop Hillary PAC caused an embarrassing scandal days earlier when they aired this Benghazi-themed ad during the Democratic Presidential Debate, one that politicized the deaths of the 4 fallen American heroes.

The Democratic Coalition Against Trump released a memo announcing the complaint and request for an investigation today, and it includes a list of payments with dates made to Rep. Gowdy by these groups, as well as the response from the Office of Congressional Ethics.

Congressional Republicans wasted nearly 5 years and millions of tax-payer dollars on multiple investigations into Benghazi.  It’s only fitting that the head of this witch hunt may soon be under congressional investigation himself.