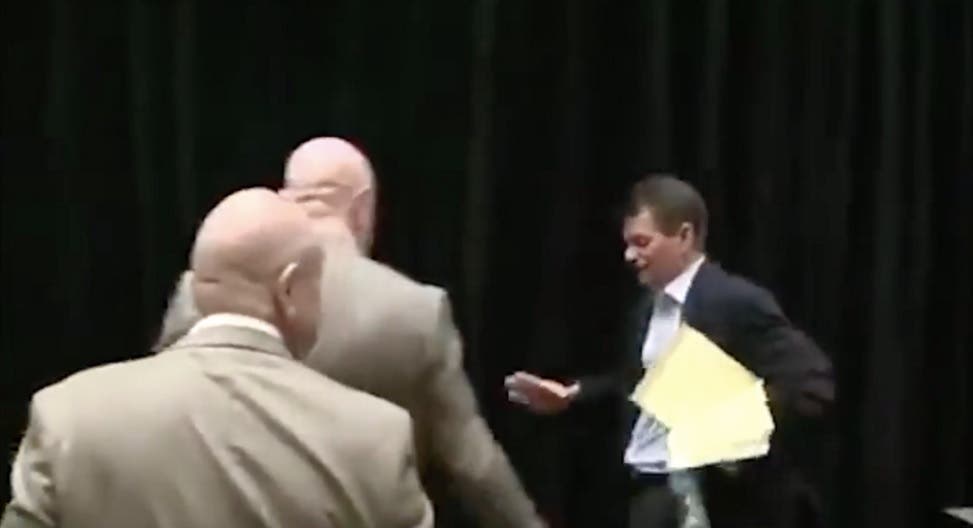 After facing a hostile crowd at a town hall meeting, a Republican Michigan Congressman was caught on a hot microphone saying that he was going to plant a fake news story that would make it seem as if his constituents were anti-American for booing his support for increased funding for the already-bloated Defense Department.

In this just-released audio recorded after the March 18 meeting,  Rep. David Trott’s conversation with an aide was caught by the group Indivisible Michigan.

“We’re going to take that part where they’re booing funding the military and I’m going to get somebody to write a story and we’re going to promote the sh*t out of that,” his aide said. “It’s un-American crap.”

The crowd had indeed booed, but it was after Trott said that the American military is “the weakest it’s ever been,” which is an outrageous lie. Most of the boos at the meeting were from people who were angry over plans to replace Obamacare with Trumpcare.

As Trott rushed off the stage after deflecting additional questions from more than a thousand attendees, the crowd was chanting “Vote him out.” Hundreds more who couldn’t get inside stood in front despite a blizzard and freezing temperatures.

Trott, who lives in the Detroit suburb of Birmingham, represents a district is in the southeastern region of the state’s lower peninsula and includes portions of Oakland and Wayne counties (Detroit). The population of about 705,000 in the area is about 82 percent white, 7 percent Asian, and 5 percent black. The meeting took place in Novi, Michigan.

Trott is one of the latest Republican Congress members to face a hostile crowd at a town hall meeting. The Republicans, led by falsifier-in-chief Donald Trump, are suddenly discovering that their constituents have grown quite fond of Obamacare and are furious that the Republican Party is fighting to take their health insurance away.

Incapable of dealing with the pressure, a number of town halls have been canceled or delayed as cowardly Republicans try to hide from the people they ostensibly represent. Some try to smear the protestors as being “agitators” paid by conservative boogeyman George Soros.

Trott himself had put off this town hall since January, when protesters began confronting him and picketing outside of his office. The Detroit Free Press reported after the town hall that constituents who call Trott’s office for meetings are being put off, and that he doesn’t actually keep any appointments.

There’s only one way to deal with Representatives who show such disrespect towards the people they work for. Vote them out!