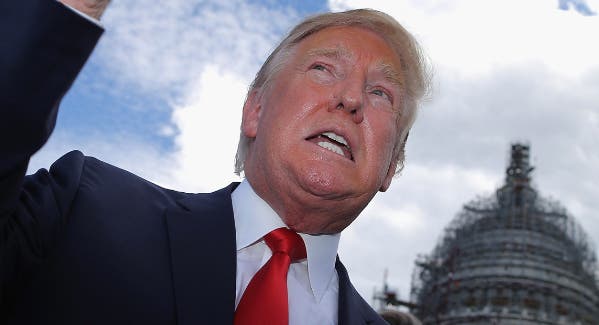 This Trump-Ivanka Tweet Just Came Back To Haunt Him

In another example of bizarro world logic, President Trump issued a stern warning to Republican Congressmen today: support the Trumpcare bill will cause 24 million people to lose their health insurance, or lose re-election.

The latest whip count shows 52 representatives still undecided and another 48 representatives leaning towards voting no on the bill, which is headed to a floor vote on Thursday.

The Congressional Budget Office released its devastating analysis of the bill last week, prompting a tsunami of outrage from the public once the extent of the cuts to Medicaid and the rise in costs for older Americans were revealed.

However, the fact that the “Trumpcare” bill would have catastrophic consequences for ordinary Americans is not the reason that many of the most conservative Republicans have failed to support the bill. These heartless ideologues think the bill doesn’t go far enough in cutting costs and giving huge tax breaks to millionaires.

Just yesterday, a new draft of the healthcare initiative was released that added provisions designed to appeal to the rebellious conservatives. These include a “work” requirement for Medicaid recipients, which would deny access without reducing any spending – just needlessly cruel. So far it’s not clear if the changes have garnered any additional support from the right wing of the party.

According to the Times:

Representative Ted Budd, a freshman Republican of North Carolina, said on Tuesday that he did not support the bill, which he said “does not provide the relief that North Carolina families need from high premiums.”

Trump must be sensing that his promised repeal and replace strategy is in danger of failing its first legislative test, given that he left the White House to deliver his message to the congressmen on their home turf.

According to Representative Richard Hudson (R-NC):

“He warned us that there are consequences if we don’t come together, for us as a party and also for individuals.”

Representative Chris Collins (R-NY) said Trump was blunt in discussing the “political repercussions” of the vote. The President apparently thinks that Republicans will gain seats in Congress if they repeal Obamacare and replace it with a half-baked plan that would make insurance unaffordable to many of the very people that voted for the man who promised them “something terrific.” He also threatened the legislators that “it could be a political liability” if they failed to support the bill.

Representative Hudson said Trump was “giving us a pretty clear warning.” The warning was pretty personal for at least one congressman, Representative Mark Meadows (R-NC), the chairman of the Tea Party-inspired House Freedom Caucus, who have rejected the initial draft of the health care initiative. Trump called out Meadows by name and said he was coming for him.

Despite the apparent threats, however, some lawmakers are still opposing their own party’s plan. Representative Leonard Lance (R-NJ) said:

“I campaigned in support of a ‘repeal and replace’ bill that would make health care more affordable and accessible and provide a smooth transition to those who were forced into Obamacare through no fault of their own,” Mr. Lance said. “The bill, as currently drafted, does none of these things.”

Why the President thinks not supporting a bill that makes health care less accessible and affordable to so many U.S. citizens would be a political liability is the biggest mystery here.