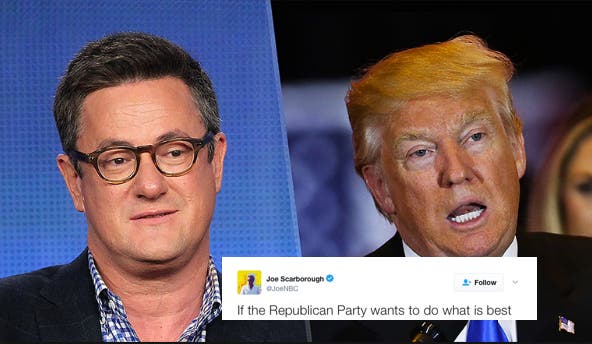 MSNBC’s Joe Scarborough has just hit Twitter with a passionate and patriotic call for Republicans to eject Representative Devin Nunes (R-CA) from his role as House Intelligence Committee Chairman for the good of the country.

If the Republican Party wants to do what is best for this country and its national security, they will remove Devin Nunes as Intel Chairman.

For Scarborough, who was a Republican congressman from Florida before his TV career took off, making a demand like this carries considerably more influence with the party than perhaps any other news anchor could muster.

Representative Nunes went directly to President Trump today to brief him on the intelligence community’s findings so far in the investigation of collusion between Russia and the Trump campaign.

Telling the President that members of his campaign staff were caught up in the legal surveillance of foreign targets after the election last fall, Nunes gave enough cover to the President that he reportedly said he now feels that his tweet storm accusing Obama of “wiretapping” has been somewhat vindicated.

The big problem is, however, that Nunes failed to notify his fellow Intelligence Committee members that he was going to give one of the targets of an FBI investigation crucial details about that investigation before it was completed, not to mention revealing the existence of classified FISA warrants to the public.

Nune’s Democratic counterpart, Adam Schiff (D-CA) was outraged by his colleague’s  underhanded actions, saying that it “casts quite a profound cloud” over whether their committee could now conduct their investigation properly.

Scarborough’s advice would benefit Republicans, who are clearly more interested in finding out who leaked the details of the Trump/Russia collusion than getting to the bottom of the treasonous behavior of Trump and his campaign staff.