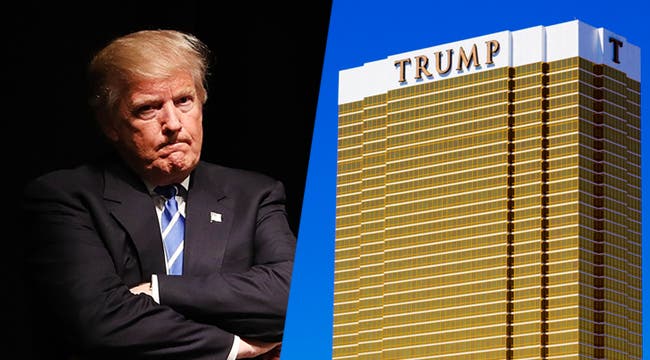 A Trump Fan Attacked An Ex-CIA Agent For Bashing Trump. His Response is EPIC

President Trump’s business empire never misses an opportunity to take advantage of Trump’s behavior. While the nation remains buzzing about Trump’s wiretapping lies which were laid bare by the FBI’s director, Trump’s company has announced a massive expansion. Americans can’t pay attention to everything Trump does wrong. Trump knows this so his company is striking now, while the iron remains hot from his scathing wiretap deception.

Due to Trump’s name being synonymous with evil, it was reported months ago that new hotels would be rebranded as “Scion” to confuse hotel goers. When announced many wondered how the new brand would proceed, and it was assumed they would move slowly to avoid appearances of improrpriety. Instead Scion plans on moving rapidly to build numerous hotels. Trump Hotels CEO Eric Danziger said:

“The Trump boys”, Eric and Donald JR, officially took over their father’s company after the election. Trump, through his now incalculable amount of lies, expects the public to believe he is not communicating with his sons or having say on his company’s moves. If one believes him, they should purchase the next expensive handful of magic beans a stranger on the street offers to sell them.

How Scion plans to pay for its expansion raises further questions about the ethics of Trump’s business while he is in the Oval Office. Trump’s business has stated they will not be spending a dime of their own money and instead will seek outside investors. Some of those investors will be real estate developers who will be tasked with using their own private investors.

If those real estate developers chosen by Trump’s business use investors from countries hostile to the United States, then Trump will profit from those adversaries. He will simultaneously have the power to issue edicts and sanctions against the same nations from which he profits. Only in trump’s world is there nothing wrong with this picture. This is not fair play.

Furthermore the real estate developer’s outside investors will place Trump in a precarious position. Those investing in his new Scion brand hotels may have hopes of gaining Trump’s favor. Trump has already shown willingness to use his position as the world’s most powerful man to grant favors to those who have helped him.

What will stop investors from pumping millions into building new hotels before asking Trump for a favor? And what will stop Trump from granting that favor? Absolutely nothing because as Trump has pointed out:

“The law’s totally on my side, the president can’t have a conflict of interest.”

“This is the new version of pay-to-play, ‘Get in there and do business with the Trump Organization.'”

The CEO of Trump Hotels since 2015, Eric Danzinger, plans to build 50 to 100 Scion brand hotels in the next three years — while Trump is in office. That assumes that Trump isn’t impeached, which looks more and more possible every single day. Keep your fingers crossed.