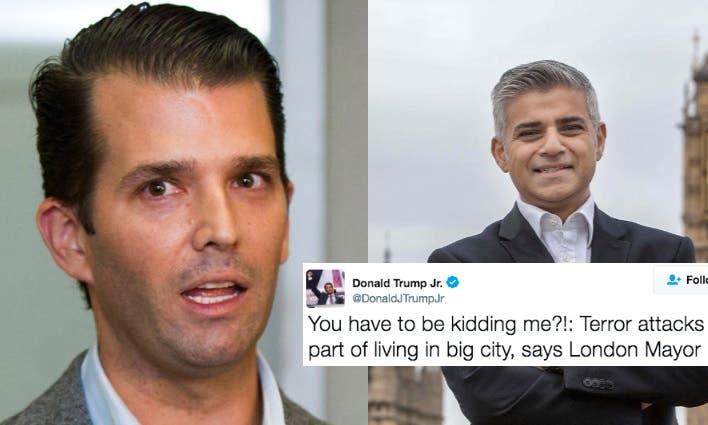 Yesterday, Donald Trump Jr. reacted to the horrifying news of the terror attack in London by taking to Twitter to insult the popular mayor, Sadiq Khan.

Trump Jr. decided to take past remarks by Mayor Khan wildly out of context, insinuating that since Mayor Khan is a Muslim, he condones or even approves of the tragic loss of life.

Refusing to take the bait offered up by a racist idiot, Khan has responded to Trump in the classiest way possible.

This is how London mayor @SadiqKhan responded when @CNN's @camanpour asked him about a Tweet from Donald Trump Jr. pic.twitter.com/mT5831Lqq7

In his tweet, Trump Jr. cited an article from British newspaper The Independent that is six months old in which Khan says that major cities are always targets for terrorism and that the threat of terror is “part and parcel of living in a big city.”

Khan meant that the threat is inevitable, not the attacks themselves. Khan’s statement in response to the New York City bombing was to remind residents that cities must take more precautions to prevent terror than, say, provincial villages. He continued to describe the anti-terror measures he believed London should employ, including,

“being vigilant, having a police force that is in touch with communities, … the security services being ready, [and] exchanging ideas and best practice.”

Later in his remarks, Khan continued to address the main points he made in the 2016 article that Trump cited, providing a rational and level-headed response to President Donald and Donald Jr. Trump’s outrageous fear mongering.

“What I do know is that the threat level in London and across the country is severe, that means an attack is highly likely. Terrorists hate the fact that whether it’s New York, whether it’s London, whether it’s Paris, whether it’s Brussels, Istanbul, whether it’s Madrid — we have diverse communities living together peacefully getting on with each other, respecting each other.

Then, Khan explained London’s reaction to the terror attack and the importance of responding with calm solidarity rather than fear and finger-pointing.

Well done to Mayor Khan for putting his ignorant detractors in their place. We continue to keep Londoners in our thoughts and prayers as the city heals from this tragedy.