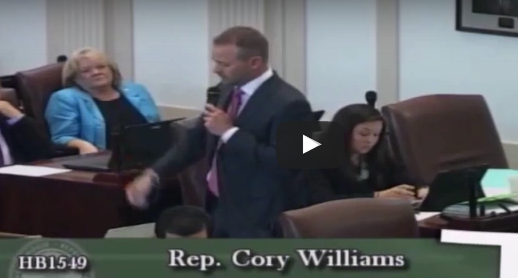 The Oklahoma House of Representatives has passed a bill that would make abortion illegal, even if a pregnancy is the result of rape, incest, genetic abnormalities or because the child would have Down Syndrome.

Now, the Republican legislator who put the bill forward is defending it because even rape and incest are “the will of God.”  (Video below)

“Life, no matter how it is conceived, is valuable and something to be protected,” said Rep. George Faught during a debate over the proposed law, according to NBC TV station KFOR.  “Let me be clear, God never approves of rape or incest. However, even in the worst circumstances, God can bring beauty from ashes.”

Faught was asked by Democratic Rep. Cory Williams if rape was, “the will of God?”

“If you read the bible,” he replied, “there’s actually a couple circumstances where that happened and the Lord uses all circumstances.”

Faught gave the same answer when asked if incest was the will of God, adding: “It may not be the best thing that ever happened,” but if you are “saying that God is not sovereign with every activity that happens in someone’s life and can’t use anything and everything in someone’s life..I disagree with that.”

If passed by the full Oklahoma legislature, doctors who perform an abortion that is banned in the bill would lose their medical license and face fines of up to $100,000. They could also be sued by women who have abortions.

The bill next goes to the Oklahoma state Senate for consideration.

In a country where people are supposed to be free to worship God – or not – this is another outrageous attempt to force the views of the religious right on everyone.

Once again the mythology of religion may trump reality.