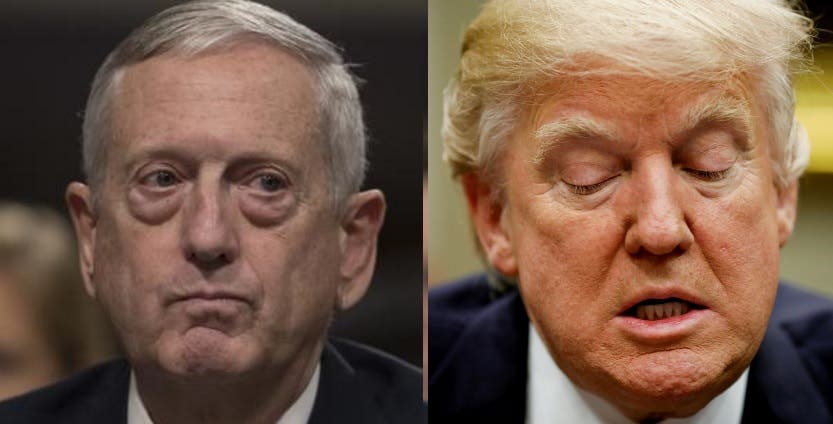 Despite what you have heard from the FAKE NEWS, I had a GREAT meeting with German Chancellor Angela Merkel. Nevertheless, Germany owes…..

…vast sums of money to NATO & the United States must be paid more for the powerful, and very expensive, defense it provides to Germany!

Mattis responded on Wednesday by informing the media that, despite being Commander-in-Chief of the most powerful NATO ally, Trump doesn’t understand how NATO works. He told the Senate Defense Appropriations Committee:

“I cannot give you an accounting for past money owed, because that’s not the way we do that in NATO. We do it through capabilities. That’s the commitment each nation makes.”

Right now most NATO countries, with the exception of the US, UK, Greece, Estonia, and Poland do not meet the organization’s target of spending 2% of GDP on defense annually (although Romania, Latvia, and Lithuania are very close). However, defense spending among NATO allies is rising, spurred on by Russian aggression and Ukraine and the seizure of Crimea.

Mattis refused to denigrate Germany for falling short of its target. Instead, he focused on continuing to strengthen the alliance while Trump obsesses about squabbles that divide countries. Speaking directly about Germany, Mattis continued,

“We are seeing Germany is committed to going to the 2%, reinforced by their minister of defense when I spoke with her and also by the chancellor, and I think they’re on the right track to lead the development of 2% budgets across the alliance.”

Mattis’s intelligent style of policy making is a welcome change from the rest of the Trump Administration. He presides over life and death matters, so we can count ourselves lucky that Trump managed to appoint someone who isn’t an incompetent, conspiracy theorist crony.

Just yesterday POLITICO published a story about Mattis infuriating Republicans in Congress by appointing staff who he thinks are best qualified for the jobs, rather than giving positions to GOP ideologues. The attempts by Trump and Republicans to bring partisanship and knee-jerk reactions into defense policy is outrageous and dangerous.