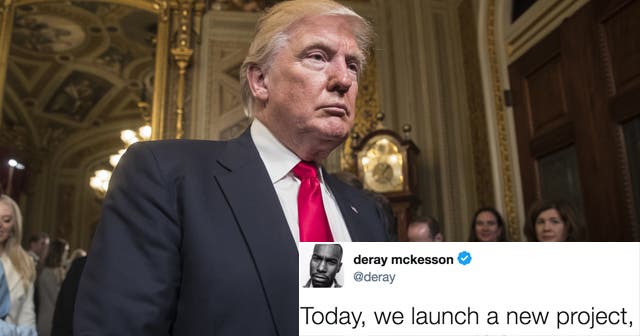 When the Indivisible guide hit the web weeks before Inauguration, it made an immediate impact on the national political climate. Citizens not only took to the streets but bombarded members of Congress to ensure that their voices were heard in opposition to the destructive agenda of Donald Trump and his regime.

Over the course of the next nine weeks, the pressure felt by conservative Senators and Representatives had turned to fear. Some Members made up lies about paid protesters and others tried to avoid constituents entirely. The resistance reached an early climax this past Friday when the top priority of Trump and virtually every Republican in Congress, the repeal of Obamacare, publicly imploded before ever coming to a vote.

Now, the resistance is taking its action to the next level. Campaign Zero co-founder Deray Mckessan announced the launch of a new grassroots organization, OurStates.org, which provides an easy-to-use interface with all the tools activists need to engage legislators on the issues most critical to stopping the Trump regime’s agenda at the state level.

Today, we launch a new project, OurStates, to reject the Trump/GOP agenda in every state. Let's take action. https://t.co/SWA9JoVRqB

The group’s website provides a state-by-state guide to the most critical pending legislation (positive and negative) on the issues of immigration, policing/protest, reproductive justice, voting rights, LGBTQ equality, and economic justice. Additionally, the site contains step-by-step best practices for pressuring your legislators as well as a tool for finding your representatives.

Shortly after Deray’s announcement, Mic released a video interview with Campaign Zero and Our States co-founder, Sam Sinyangwe, detailing the purpose and use of the site (video below). Sinyangwe explains that while there is massive attention focused on stopping Trump’s destructive plans at a federal level, many conservative states are working efficiently to implement dangerous components of the agenda under the radar and without a strong fight. On the flip side, more progressive states can be pushed to institute proactive policies that protect vulnerable residents and those who have been targeted by the Trump regime.

In just 67 days, we have seen the clear results of a well organized resistance. Defeating Trumpcare was a major victory for every American. Still, this is only the beginning. Defeating the Trump agenda will be a years long effort, and with each victory, we must be ready to up our game going forward.

Our State, along with the Indivisible Guide and the Resistance Manual, provide the critical organizational tools necessary to winning future battles — and there will be many. With a determined and well organized resistance however, even in the face of widespread corruption and cruelty in Washington, there remains plenty of reason for hope ahead.