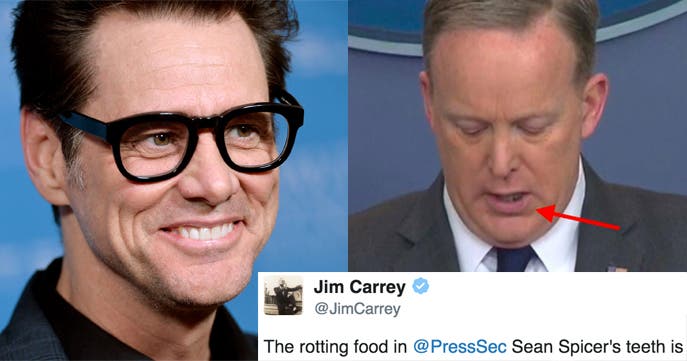 If it takes one to know one, then nothing could be more perfect than the star of “Liar Liar” calling out Sean Spicer.

At Spicer’s press briefing today, viewers noticed that, no matter which side of his mouth the White House Press Secretary spoke out of, a piece of food could be seen in his teeth. For the many who have grown tired of the lies and hypocrisy, the distraction was more than welcome, and Twitter reacted with several hilarious tweets:

Looks like Melissa McCarthy will be trading in the chewing gum for some fresh greens. #PressBriefing #SpicerTeeth pic.twitter.com/JJeZrlLzC3

If Sean Spicer had true friends, they would've told him that he has something in his teeth, before going on live tv pic.twitter.com/BirAs49T45

The President has made it abundantly clear, there is absolutely nothing in my teeth.

Perhaps the best of all was a meme of Jim Carrey as Ace Ventura:

Carrey did not miss a beat, chiming in with the perfect finishing touch:

A comedian who built a reputation for low-brow humor rose above the fray to remind us of what’s really important here: the Press Secretary is lying to us. Daily. It will take more than a piece of food to make Jim Carrey or anyone else forget it.