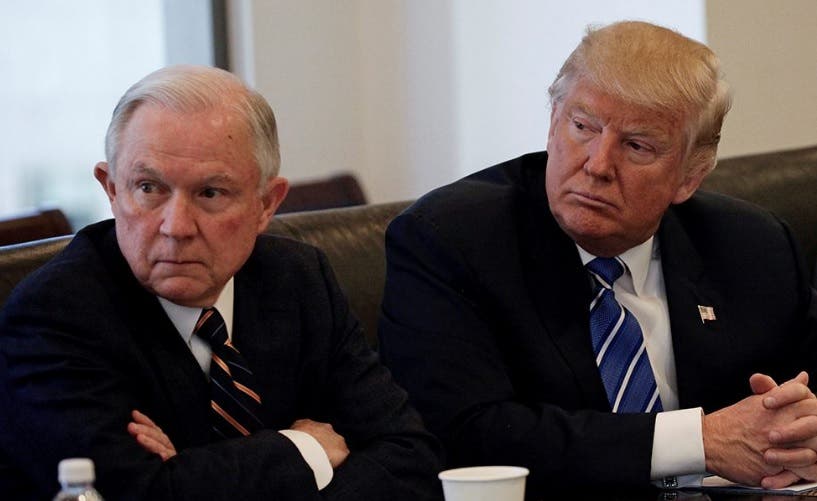 Lawyers for Good Government just filed a Bar complaint against former Alabama Senator Jeff Sessions for committing four distinct types of professional misconduct in his two months as Attorney General, according to the Alabama Reporter:

Trump’s Attorney General is racking up the complaints this month, after Massachusetts lawyer J. Whitfield Larrabee filed his own Alabama Bar complaint on March 9th and a criminal complaint to the US Department of Justice on behalf of 23 petitioners spread across the United States just yesterday.

The Lawyers for Good Government cited four specific reasons that Sessions license to practice law should be revoked in today’s complaint. Attorneys from 50 states and the District of Columbia signed today’s complaint, which filed today with the Alabama Bar.  (see in full below):

(1) An affirmative misrepresentation of fact under oath during testimony in Mr. Sessions’ Senate confirmation process, specifically to a question propounded by Senator Al Franken.

(2) During Mr. Sessions’ US Senate confirmation hearing, failure to disclose significant facts material to an issue of national significance, that is, contacts with the Russian government during the presidential election.

(4) As Attorney General, withholding information about his own discussions with a representative of the Russian government, all while overseeing investigations into Russian interference with the US electoral process and Trump-Russia ties.

“With nearly 2,000 lawyers and the ACLU making ethics complaints against him,” J. Whitfield Larrabee floridly remarked in an interview today about both cases, after seeing today’s complaint, “Jeff Sessions is now subject to more complaints than any lawyer in the history of the United States.”

“The dishonest acts that are substantiated in these Bar complaints indicate that Sessions cannot continue to properly perform his responsibilities without damaging the integrity of the Department of Justice.  The Department is a vitally important institution in our democracy.   If Sessions does not immediately resign, it is the duty of President Trump to fire him.”

The Alabama Bar has every reason to take action against AG Sessions because their rules are quite explicit. The Bar’s regulatory jurisdiction over a lawyer’s conduct doesn’t end when they become a public servant, it only increases. Their rules say:

“Lawyers holding public office assume legal responsibilities going beyond those of other citizens. A lawyer’s abuse of public office can suggest an inability to fulfill the professional role of attorney. “

The Attorney General is America’s top law enforcement officer, and in just a short amount of time, Jeff Sessions has proven himself incapable of following the law, let alone supervising its enforcement.

Even worse, his insane ideas about Guantanamo Bay and utterly fact-free assertions about legal marijuana – which over half of the states have enshrined in state laws and constitutions – would be best left out of the top law enforcement job in the USA.

America will be a better place when Attorney General Jeff Sessions is out of office and has a whole lot more time to devote to his own, full-time legal defense from the criminal and Bar complaints about his contemptuous lies to Congress.