Today Ivanka Trump, President Donald Trump’s eldest daughter, took her three children to the Washington D.C. zoo. She posted a picture on her Twitter feed standing next to an elephant and referring to the animal as a “new friend.”

The tweet disgusted many on the internet, who despise the role she plays in whitewashing her atrocious family and their disturbing political and financial games.

While that’s certainly a nice picture with an elephant, it instantly reminded some people of this photo of Donald Trump Jr., Ivanka’s brother, in which he is holding the tail of an elephant he had just killed:

Many Americans are growing tired of Ivanka’s perpetually cheery veneer which is weaponized by the Trump family to make them all seem palatable. ‘Concerned about Donald Jr.’s big game killing spree? Take a look at Ivanka’s adorable elephant photo!’

Ivanka tries to act like she is a normal mother doing normal things – like going to the D.C. zoo – despite the fact that she uprooted her family and moved them to D.C. so she could play ‘government official.’ Ivanka has no relevant experience, she doesn’t even have a job title, but she gets a West Wing office with a top level security clearance. Like a normal mother.

She has gotten far too involved, first in her father’s campaign and now in the White House to be considered anything other than complicit in pushing through his agenda. Posing with animals doesn’t work when everyone knows you’re the righthand woman to a bigoted, tyrannical president. 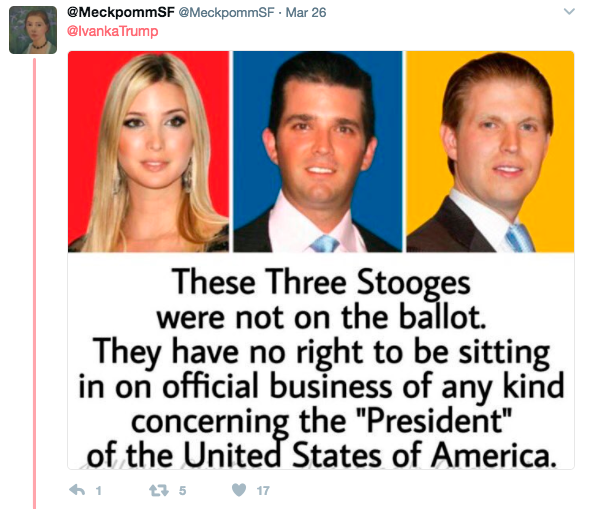