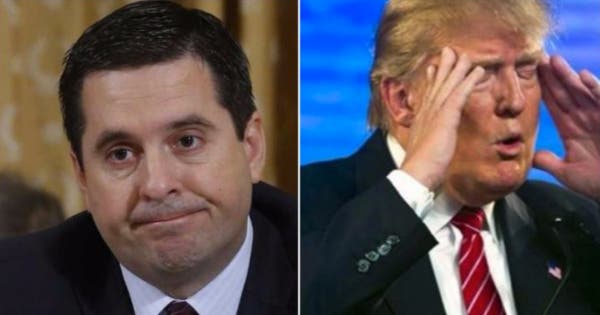 The committee heard testimony last week from both FBI Director James Comey and National Security Agency Director Mike Rogers that directly contradicted President Trump’s claims that he was “wiretapped” by his predecessor, President Obama, and revealed that the Trump campaign has been under investigation for collusion with Russia since last July.

That hearing was followed by some suspicious behavior from Rep. Nunes, who went to the White House the very next day to examine “confidential intelligence reports” and then proceeded to brief Trump on the details before informing any of his colleagues on the Intelligence Committee.

Rep. Adam Schiff (D-CA), the lead Democrat on the committee, criticized the unprecedented disclosure of these classified documents to the subject of the investigation, and Democrats and Republicans alike have called for Speaker of the House Paul Ryan (R-WI) to remove Nunes from the committee because of his inability to remain impartial in the matter.

Rep. Nunes served as a member of the Trump transition team and has made several moves this week that led another Committee member, Rep. Jim Himes (D-CT), to lament “We’ve been frozen”.  Nonetheless, he has refused to recuse himself from the investigation, hypocritically calling the accusations politically motivated.

He has also refused to divulge his “sources” for his Trump surveillance allegations, even keeping his own committee members in the dark.

While all of this raises considerable speculation about coordination between the Intelligence Committee Chairman and the Trump Administration, The New Yorker‘s Ryan Lizza has delivered the real smoking gun.

Referring to Rep. Nunes numerous references to the “incidental collection” of communications of American citizens while intelligence agencies were monitoring foreign agents, Lizza says that he was told in advance by senior White House officials exactly what Nunes would say in the committee meeting.

The White House clearly indicated to me that it knew Nunes would highlight this issue. “It’s backdoor surveillance where it’s not just incidental, it’s systematic,” the White House official said. “Watch Nunes today.”

Sure enough, at last Monday’s hearing, Nunes asked in his opening statement, “Were the communications of officials or associates of any campaign subject to any kind of improper surveillance?”

This certainly paints a vivid picture of Nunes is acting as Trump’s puppet, rather than the leader of a non-partisan investigation into Russian election manipulation.

Coincidently, The Washington Post has reported that, right before Nunes scrapped the testimony, the White House sought to block Sally Yates from appearing. According to Rep. Himes:

“Any blocking of anyone or anything simply stokes suspicion of what the Administration might be hiding”.

When Trump’s press secretary Sean Spicer responded to the report saying, “The White House has taken no action to prevent Sally Yates from testifying and the Department of Justice specifically told her that it would not stop her”, The Post posted letters exchanged by Yates’s attorney and the Administration that contradict Spicer’s claim.

Meanwhile the House investigation has seemingly ground to a halt. Nunes wants to call Comey and Rogers back to testify behind closed doors, but according to Rep. Himes “no information has been shared with Democrats, Republicans, staff,”  accusing Nunes of “a very transparent effort to prevent Brennan and Clapper and the Deputy Attorney General from testifying.”

For its part, the FBI told Peter Alexander of NBC News that they have received no request for Director Comey to reappear before the panel.

“Since he was a key part of that transition team, I don’t see how he can reasonably expect to lead an investigation into whether proper minimization procedures were being followed that might impact him personally.”

With such over-whelming evidence of coordination of messaging between Trump and Rep. Nunes, it’s difficult to see how the Committee Chairman can continue to reject the calls for him to step down and hand the investigation over to an independent prosecutor.