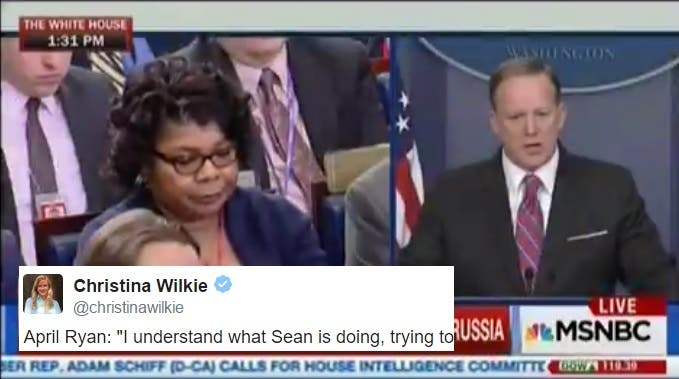 In the second incident of offensive condescension from Republicans towards prominent black women today, White House Press Secretary Sean Spicer just spoke down to a reporter in the rudest way.

During his daily briefing, Spicer grew agitated at the questions from reporters demanding information about Trump and the ongoing investigation into his campaign’s potentially treasonous collusion with agents of the Russian Federation.

“I’ve said it from the day that I got here, there is no connection. If the president puts Russian salad dressing on his salad tonight, somehow that’s a Russian connection,” complained Spicer.

He then decided to talk down to veteran White House correspondent and Bureau Chief of the American Urban Radio Networks April Ryan:

“At some point, report the facts. Every single person who has been briefed on this subject has come away with the same conclusion — Republican, Democrat. I’m sorry that that disgusts you. You’re shaking your head. STOP shaking your head. At some point, April, you’re going to have to take no for an answer with respect to whether or not there was collusion.”

April Ryan, for her part, decided to rise above Spicer’s insulting remarks and gracefully refused to take offense, embodying the professionalism that Spicer so obviously lacks. Speaking to the Huffington Post’s Christina Wilkie, Ryan said:

April Ryan: "I understand what Sean is doing, trying to make this administration look better … and unfortunately I was road kill today.”

It’s very hard to imagine Spicer speaking so rudely to a white, male reporter. His actions show that no matter how accomplished a woman of color can be and no matter how good she is at her job, she’s still perceived by these Republicans as someone to be rudely chastised when she dares oversteps her bounds and challenge a white man’s obviously false statements.

But that’s the Trump administration for you. Disgraceful personal attacks, blustering denial, and patronizing arrogance are the only tools they have to defend themselves from media scrutiny – and they will soon find that won’t be nearly enough to throw America’s journalists off the trail of Trump’s treason.