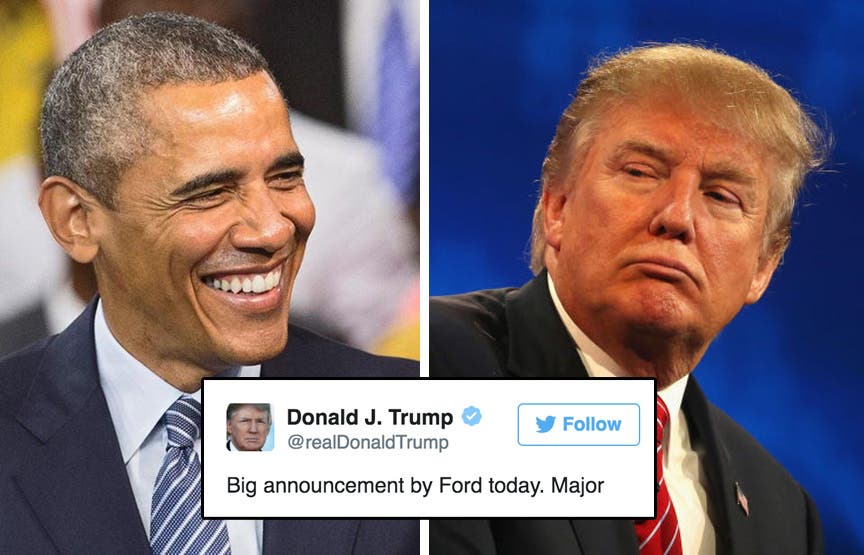 Today, yet again, President Trump jumped at the opportunity to take a victory lap on Twitter over news that a deal brokered under President Obama, long before he took office, will come to fruition soon.

The Ford Motor Company announced early Tuesday that it will invest $9 billion in facilities across the U.S., including three facilities in job-starved Michigan that will manufacture the new Ford Ranger and Bronco models.

Good news for everyone, to be sure, and Trump wasted no time taking to Twitter with this bit of chest pounding and implying, as usual, that he’s the one responsible:

The only problem? According to Ford itself:

“While Trump was quick to take credit for the investment, the plan is “consistent with what we announced previously,” Joe Hinrichs, Ford’s President of the Americas, told NBC News, noting that all three projects were in the works well before Trump took office — the largest, involving an $850 million assembly plant investment, approved as part of a deal with the United Auto Workers Union in 2015.”

Just a fraction Ford’s investment “announced” today constitutes new spending or job creation.  Most of it is a just a confirmation of the deal worked out between Ford and the United Auto Workers back in 2015, under President Obama.

95 percent of $9 billion in U.S. investment is part of the 2015 agreement struck between the automaker and the UAW.  Only $350 million represents additional investment, and $200 million of that has been set aside for a data center, not for facilities that will create the kind of manufacturing jobs Trump promised his base.

Trump is the first President to run a campaign based on the lie that America was a ‘disaster’ that the guy he hoped to replace created, and then take credit for the accomplishments achieved under that same guy’s watch.

One last interesting note:  Many of the jobs that this major investment by Ford will create aren’t expected to be filled until 2019.  At the rate that this White House is being investigated for possible treason, who knows which President will take the victory lap then.