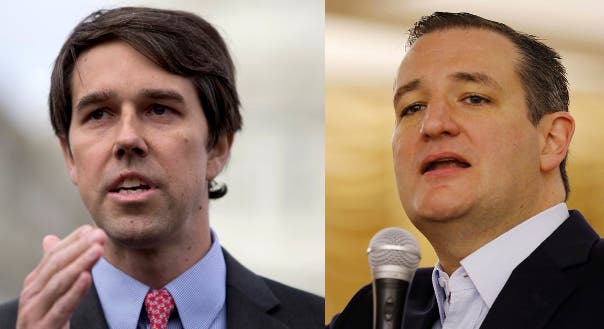 A Democratic Congressman in Texas is expected to announce this week that he will fight to toss Ted Cruz out of the Senate in next year’s election.

Rep. Beto O’Rourke (D-TX) is a former punk rocker who managed to win an upset victory to represent west Texas in Congress six years ago. His campaign staff has scheduled an announcement for this Friday in his hometown of El Paso, according to The Houston Chronicle.

Democrats are excited at the prospect of the young, charismatic three-term congressman taking on the ultra-conservative religious extremist and failed presidential hopeful. The contrast between the two politicians could not be more striking.

Rep. O’Rourke is a fourth-generation Irish American who toured in punk bands before graduating from Columbia University and starting an internet software company. Since his election to Congress, Rep. O’Rourke has argued forcefully against the war on drugs as an unwinnable waste of government resources and called for the legalization of marijuana. He’s also a strong advocate of environmental and LGBTQ rights.

Unlike progressive Texas native O’Rourke, Ted Cruz was born in Canada to a Cuban immigrant father and an American mother. Ironically, their positions on immigration and border security could not be more different from their origins.

Growing up in the border town of El Paso, O’Rourke values immigrants and supports a close relationship with Mexico citing the economic and cultural benefits to America. Cruz has been a strong supporter of President Trump’s immigration crackdown and sees no path to citizenship for anyone in the U.S. illegally.

While O’Rourke, who has been described as “Kennedy-esque”, would still need to fend off any primary challengers to nab his party’s nomination, Texas Democrats are likely to have a strong challenger in their corner to bring down America’s most despised Senator.